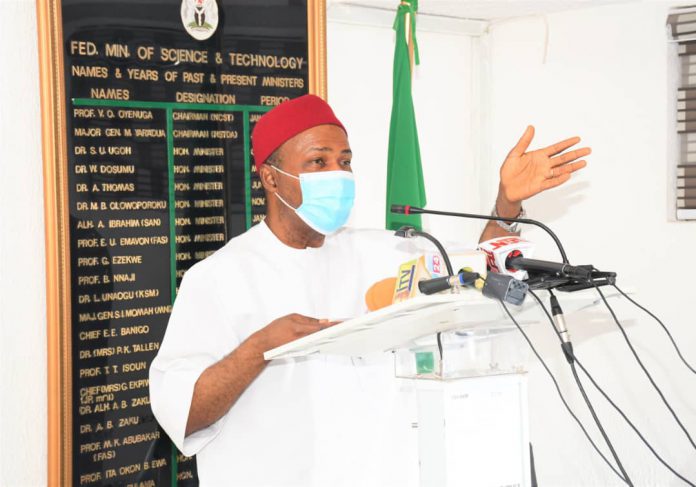 Minister of Science, Technology and Innovation, Dr Ogbonnaya Onu has said that the Ministry’s effort through one of its Policies, the National Strategy for competitiveness in raw materials has led to the country’s ranking from 115 out of 140 countries by the World Economic Forum Assessment, 2018 to 2019.

He said this during the 27th quarterly meeting with management and staff of the ministry, on Friday in Abuja.

The minister said that when he came on board, the ministry was in bad shape but was raised to its epoch through the regular meetings with the management and staff.

He added that these meetings led to the creation of several other policies amongst which, five were approved, while four are awaiting approval by the Federal Executive Council.

The Minister also said that by 2019 the ministry won the Servicom award of Excellency and ranked best performing ministry in terms of service delivery.

The National Office for Technology Acquisition and Promotion (NOTAP) by the Presidential Council under the chairmanship of the Vice President, Professor. Yemi Osinbajo was also awarded the best in terms of Transparency in Service Delivery in all MDAs.

Onu also said that on 31st January 2022, National Assembly met with 270 Agencies and stakeholders out of which, the Energy Commission of Nigeria (ECN) was recognised as the best in terms of 100 percent remittance of tax to the Federation Account.

The Minister further added that the University of Transportation in Daura, Kastina State is the product of one of the policies of the Ministry which is Executive Order No. 5.

Onu also said the effort by the Anambra State Government in promoting local content in the area of indigenous technology; industrialization is another added advantage of the Executive Order policy.

He, therefore, thanked the Directors, and CEO of agencies in the ministry for making sure that this meeting is held regularly with the belief that the ministry will be able to achieve more for the benefit of the nation.

THE LIES ABOUT NYSC