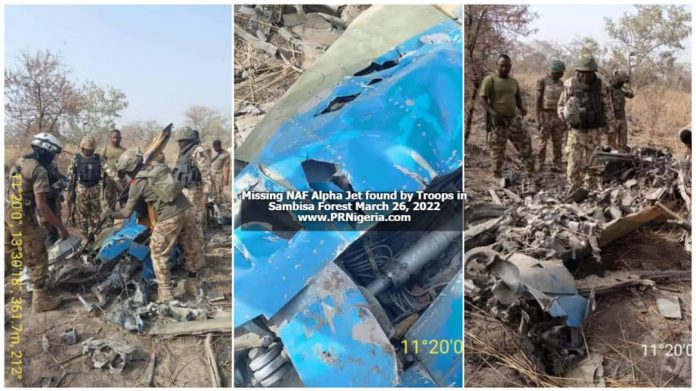 A security news platform PRNigeria had reported that the NAF Alpha-Jet lost contact with radar, while on an interdiction mission in support of ground troops on the evening of March 31, 2021.

Posting on its verified Facebook page today (yesterday), the Nigerian Army states that: “Troops of Operation Desert Sanity on a clearance patrol in Sambisa Forest, Borno State, have uncovered the wreckage of crashed Alpha Jet aircraft (NAF475) that went off the radar with 2 crew members on 31 March 2021. Further exploitation ongoing.”

It would be exactly one year after the crash. Sources had told PRNigeria that the fighter jet was last seen flying around Goni Kurmiri and Njimia villages after attacking terrorist locations at the Sambisa Axis on Wednesday evening.

The mission was part of the counterinsurgency operations in the North East.

“Bad weather could be blamed for the missing jet as hazy weather had been a stumbling block in the military operation. The trained combat pilots have always responded to distress calls and emergency situations in the protection of troops and the citizens from activities of terrorists in the Northeast.

Meanwhile, in continuation with the ongoing clearance operations, the troops have also conducted further exploitation around Ukuba/Camp Zairo in Sambisa Forest and discovered IED making workshops of Boko Haram/ISWAP.