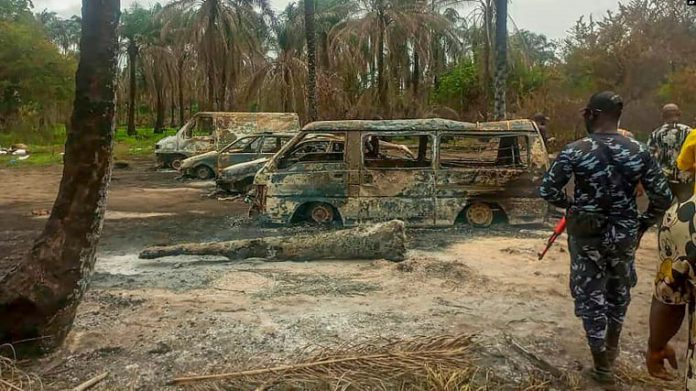 The Imo state commissioner for information, Declan Emelumba, said officials are probing Friday’s fire and explosion at an illegal oil bunkering site, or ‘kpofire’ in the Egbema local government area.

It was gathered that he boundary is between Imo state and the oil-rich Rivers state.

He said officials are also investigating the extent of deaths, injuries and damages. Many of those killed are burned beyond recognition. Most of them were workers at the illegal refinery. On Sunday, emergency teams continued their response in the affected area.

The explosion, which local officials say is the deadliest in years, is raising concerns. Energy expert Odion Omonfoman said the high rate of poverty and deprivation in the region is the reason many locals are endangering their lives.

“If you have a fuel station in a community, that community must have electricity, must have some form of energy source for cooking. Until you start addressing the basic needs of people… and you’d be shocked …meeting their basic needs can make them go to this extreme length.”

Nigerian President Muhammadu Buhari, offered his condolences to the families of the victims and described the incident as a “catastrophe and a national disaster.”

In a statement on Sunday, Buhari offered his condolences to the families of the victims and said those responsible for the explosions must be caught and brought to justice. Authorities are looking for the operator of the refinery.

Oil theft and pipeline vandalism have been reported in Nigeria for decades. Authorities say the country loses 150,000 barrels a day or up to $4 billion a year to these activities. In January, authorities renewed a crackdown on illegal refineries that operated by tapping crude oil from pipelines owned by oil companies. Many suspects were arrested, and many sites shut down.

Samuel Nwanosike, a local government head in Ikwerre – one of the areas affected by the kpofire activities in the Rivers state, said it’s criminality that needs to be rooted out..

“Yes, lack of jobs is part of it but it’s not an avenue for you to go into criminality,” he said. “With the activities that have taken the lives of over 100 people like you’ve seen in Egbema is clearly a criminal activity and must be declared as such. In Ikwerre local government as we speak, all 285 illegal refinery spots that have been identified have been destroyed.”