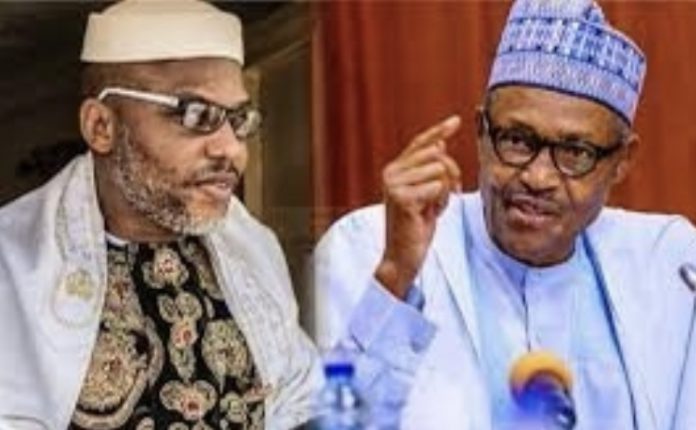 President Buhari has stated that the releasing of IPOB leader, Mazi Nnamdi Kanu is an impossibility as he doesn’t interfere with judiciary processes.

The President stated this during an interview with Channels TV, asserting that the IPOB leader should go to court and defend himself.

President Buhari said depending on Kanu’s conduct, there might be a political solution to his trial.

“If there is one institution I wouldn’t like to interfere with, it is the judiciary but what I wonder is that when Kanu was in Europe abusing this administration and mentioning too many things I never thought really he wants to voluntarily come to defend himself on the accusation … so we are allowing him to defend himself in our system not to be abusing us from Europe as if he was not a Nigerian.

Let him come and criticize us here. Nigerians know that I don’t interfere with the judiciary, let him be listened to. For those who are saying we should release him, no, we cannot release him.”

“If he behaves himself, all well and good but if you go to a foreign country and keep on sending incorrect economic and security problems against your country thinking that you never have to account for what you have been doing, let him account for what he has been doing,” he added.

Olowu of Owu kingdom reportedly dies after a brief illness