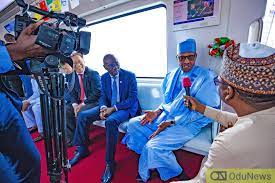 This was as he joined other top government officials in a maiden ride from the Marina Station to National Theatre Station.

Special Adviser to the President on Media and Publicity, Femi Adesina, revealed this in a statement he signed on Tuesday titled ‘President Buhari inaugurates Phase 1 of Lagos Blue Rail Line; takes train ride.’

Speaking at the event, the Lagos State Governor, Babajide Sanwo-Olu, stated that the Line would accommodate about 25,000 passengers per hour, thereby reducing travel time, improve the quality of life of Lagosians, and make the state one of the most resilient mega-cities in Africa.

He added that the piece of infrastructure will position Lagos to compete favourably with other megacities globally.

“This iconic Marina Station would be the largest and busiest in Africa. It has the capacity to process about 450 passengers per minute, meaning that in an hour this station can process about 25,000 passengers.”

Sanwo-Olu also hinted that he would invite the President again to Lagos to commission the Red Line, which he described as a bigger rail corridor project compared with the Blue Rail Line.

According to him, Tinubu envisioned and laid the foundation for the project as governor.

Meanwhile, the Chinese Ambassador to Nigeria, Cui Jianchun, said the completion of Phase 1 of the project is a demonstration of the harmony in the bilateral relations between Nigeria and the Asian Tiger.

The President also witnessed the signing of the contract for the construction of the second phase of the Lagos Blue Rail Line by the Managing Director of Lagos Metropolitan Area Transport Authority, Abimbola Akinajo, and the President of CCECC, Chen Sichang.

Load shedding to alternate between stages 3 and 4 this week

Partnering with men and boys to end FGM: A call to...

Mozambique, Tanzania to fight Terrorism together

Kunle Afolayan Reveals Intention to Produce a Movie based on Lekki...