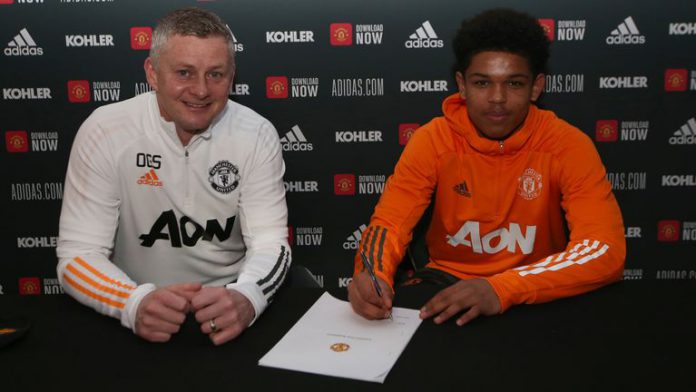 A 17-year-old winger, Shola Shoretire, who is highly rated by Manchester United has signed his first professional deal with the club after starring for the Under-23s this season

The 17-year-old winger, who has been with United since the age of nine, is another product to have emerged from the club’s Academy system. He has been starring for United’s U23s.

The teenage sensation was said to have rejected advances from PSG, Bayern Munich and Barcelona to sign for Manchester United.

‘It’s a dream come true to sign my first professional contract for my boyhood club! Such a proud day for me and my family.

‘Thank you to everyone at the club and to my family who have helped me get to this moment. Hard work continues!’

‘The 17-year-old will be looking to hone his talents behind the scenes and continue his development at the Red Devils in the coming months and years’.

Born in Nigeria, Shoretire spent his early childhood in Newcastle and played for Wallsend Boys Club – following in the footsteps of Peter Beardsley, Alan Shearer, Michael Carrick, and Lee Clark.

The England Under-16 international has been an important part of Neil Wood’s side this season, featuring 13 times in Premier League 2, scoring five goals and registering three assists.