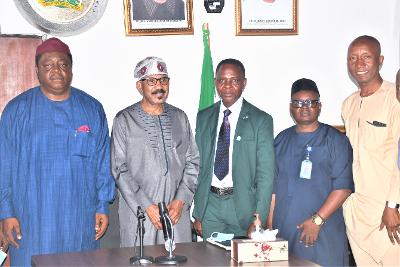 The Minister of Science, Technology and Innovation, Dr (Sen). Adeleke Olorunnimbe Mamora has said that Nigeria needs a rebirth and rebuild of her institutions as well as restoration of her national core values so as to provide lasting solutions to the challenges militating against the progress of the nation.

The Minister said this when he received a delegation from the Public Complaint Commission (PCC) in his office, in Abuja.

Dr Mamora stated that strengthening our institutions to compete with that of the developed nations will lead to the emancipation of Nigeria from the shackles of the present socio-economic woes.

The Minister further emphasized that strict implementation of the rule of law is one of the strongest pillars of any civilized and democratic society as it prevents impunity in any society.

He used the opportunity to call for the restoration of national core values as enshrined in the constitution. He further described this as the article of faith that binds the leadership of the nation and its citizens.

He noted that Nigeria of our dream cannot be achieved without our collaboration and collective efforts to make it a reality.

Earlier in his remarks, the Commissioner of the Public Complaints Commission, Hon. Abimbola Ayo-Yussuf, who was represented by the Secretary of the Commission Mr Philip Enyali said that the essence of the visit was to seek the support of the Ministry on the forthcoming National Anti-corruption Marathon and the 4th edition of the National Youth and Students Summit on Anti-Corruption Sensitization Campaign.

The commissioner informed the Minister of the PCC’s core mandate which includes initiating investigations on matters that border on any form of administrative injustice adding that youths need to be carried along and be the primary focus of key developmental policies.