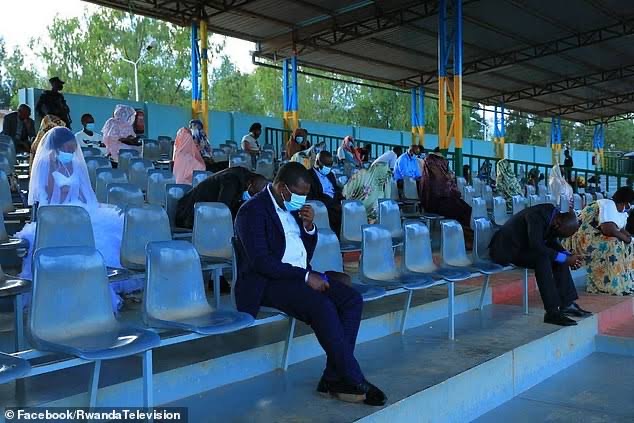 According to reports, at least three weddings have been broken up by the police over COVID-19 breaches in Rwanda.

Photos depict that the entire wedding party has been held in an outdoor stadium after the arrest.

While Rwanda has been praised for COVID–19 response, human rights groups have raised concerns about the measures authorities are using to contain the virus.

A newlywed bride and groom were forced to spend the night sitting outside in an empty stadium along with their wedding party as punishment for breaking Covid rules in Rwanda.

According to the BBC, police in the capital, Kigali, had stopped at least three weddings because they exceeded the maximum of 20 guests.

Rwanda’s response to Covid-19 has been praised by international authorities as the country has seen just 22,684 coronavirus cases with a total of 311 deaths since the pandemic began last year.

However, their measures have been criticised with campaigners claiming they have violated human rights in the process.

According to the Human Rights Watch, many of those arrested for Covid breaches have been detained in sports stadiums without due process.

The group claim they have been forced to spend nights listening to public-health messages over loudspeakers and under the watch of armed guards.

One bride told the BBC, “spending the evening at a stadium on my wedding day is a bad memory that will never fade in my life.

‘Inflicting pain and shaming people like this doesn’t make us fear corona or observe measures.’

However, Rwandan National Police Spokesperson CP John Bosco told local media outlets he was unapologetic about the incident and said more stern actions will be taken for COVID-19 protocol violators.