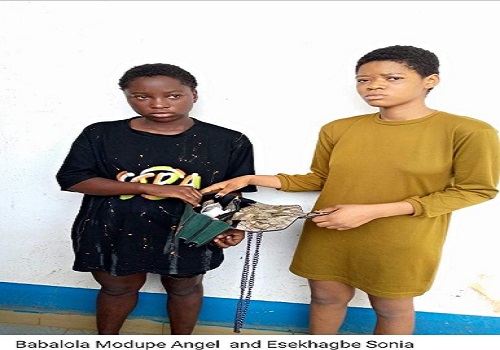 According to the agency’s spokesman, Femi Babafemi, in a statement on Sunday, the ladies, who are part-time students of the institution, are Babalola Modupe Angel, 19 and Esekhagbe Sonia, 20.

He disclosed that they were arrested on Thursday, September 23, with 21 wraps of weed.

He also revealed some other people that were caught with illegal drugs.

The statement reads: “In the same vein, one Ms. Ozigbo Joy Nneka has been arrested at NAHCO Export Shed of the Murtala Mohammed International Airport, MMIA, Lagos while trying to export packs of codeine tablets weighing 15.15kg to the United Kingdom last Wednesday.

“A day earlier, Tuesday 21st September, narcotic officers at the airport also arrested one Nwajindo Ndubuisi Emmanuel during inward clearance of Ethiopian Airline passengers at the E-arrival hall. Some bottles of codeine weighing 5.65kg were recovered from him.

“Also at the airport, a total of 150.30kg of khat was seized on Monday 20th Sept after six weeks of placing the consignment, which arrived SAHCO shed on August 2, via Kenyan Airways cargo flight, on surveillance.

“Earlier same day, men of the Irrua Area Command of the Agency working on actionable intelligence evacuated 10 bags of cannabis sativa weighing 135kg in Amahor bush in Igueben area. The exhibits were stored ready for transportation to other parts of the country.

“In the same vein, men of the Okada Area Command in the early hours of Sunday 26th Sept evacuated 2,937 kilograms of cannabis sativa from Utese forest in Ovia North East local government area of Edo state.

“In Kaduna state, Mrs. Fatima Musa, a widow and notorious drug dealer was arrested on Saturday 18th Sept at Afana village in Zango Kataf LGA while moving 12kg of cannabis to Jos. She had earlier been convicted and sentenced to six months imprisonment on 7th July 2020 following her arrest on 3rd March 2020 with 45kg of cannabis sativa.

“While commending the officers and men of the FCT, MMIA, Edo and Kaduna Commands of the Agency for the raids, arrests and seizures in the past week, Gen. Marwa urged them not to rest on their oars until the menace of drug trafficking and abuse is reduced to the barest minimum in every part of the country.”