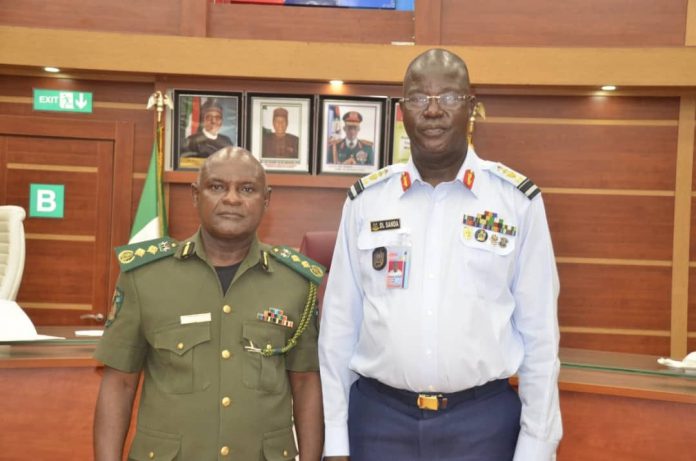 The Conservator General (CG), National Park Service (NPS), Dr Ibrahim Musa Goni has expressed the readiness of the Service to partner with the Armed Forces of Nigeria (AFN) towards safeguarding the nation’s forest reserve.

The CG made this known when he led NPS management staff on a courtesy visit to the Chief of Defence Staff (CDS), General Lucky Irabor at the Defence Headquarters (DHQ), Abuja.

Dr Goni stated that the NPS was established for the purpose of protecting and conserving the biodiversity in the designated areas which he identified as national parks, game reserves and forest reserves.

Dr Goni who applauded the AFN for supporting NPS thus far noted that there was the need to sustain the existing synergy, by working together to tackle the current security challenges facing the nation.

The CG further explained that the collaborative arrangement would be on combat training of NPS personnel and logistic support to boost the Agency’s mandate of securing the forest reserves.

According to him, “these forest reserves and national parks which are approximately 1,129 square metres have become a hideout for bandits and terrorists”, he added.

Responding, the CDS, Gen Lucky Irabor, represented by the Chief of Defence Policy and Plans, Air Vice Marshal Dahiru Sanda reiterated the commitment of the AFN in collaborating with the NPS, describing the Service as a key agency in the security architecture of the nation.

He maintained that the relevant stakeholders must support the organization towards ensuring that the forests are well protected against criminalities.

The CDS charged NPS on the need to dominate the nation’s forests in terms of intelligence gathering and sharing of information with the military and other security agencies so as to checkmate every form of terror and other crimes.

Nomusa Dube-Ncube will be a compromised premier of KZN, claims IFP