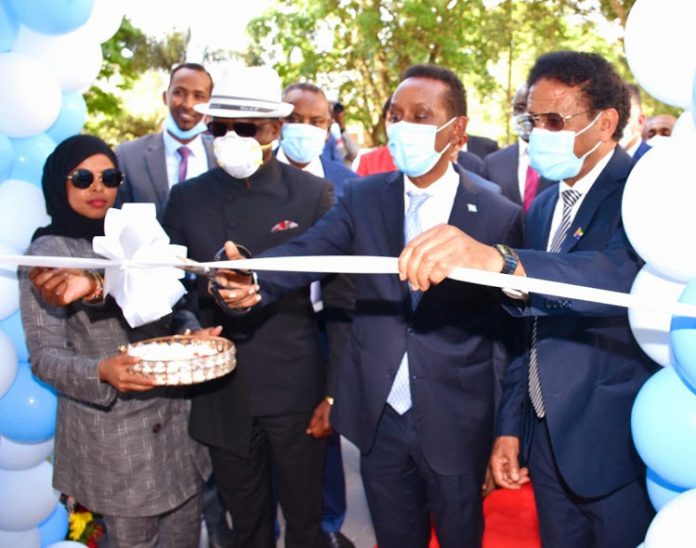 The building on Lower Kabete Road in Westlands was purchased by the Somali government in 1972. It has never been used since 1994 after Somalia descended into chaos.

Meanwhile, the embassy and building were illegally sold off as a court in Nairobi established in December 2010 after a five-year-long legal battle.

The embassy has operated from Likoni Lane, off Dennis Pritt Road in Kilimani.

Foreign Affairs CAS Ababu Namwamba and Somali Foreign Affairs, Minister Ahmed who presided over the reopening on Saturday was certain that it is another key step forward.

Ababu said, “Standing here, looking at this gleaming building, I don’t see just a fresh office block. I see a symbol of Somalia rising from the ashes back to greatness, like the proverbial Phoenix.”

He emphasized that Kenya will continue to support Somalia in its re-building efforts for a peaceful, secure, stable, and prosperous Somalia and the Horn of Africa.

“Our common endeavor for durable peace, viable stability, and sustainable development for both our peoples and region continue to underpin the necessity for our mutual cooperation,” Ababu said.

The CAS also assured the Somali government of Kenya’s commitment to enhance bilateral relations through trade and people-to-people interactions.

He affirmed that Kenya will continue to champion the issues of Somalia during her tenure as a non-permanent member of the UN Security Council in 2021-22.

The building was opened by the Foreign Affairs PS Macharia Kamau when he led a delegation on November 7.

“Great opportunities for bilateral and regional cooperation and trade exist between Kenya and Somalia as Somalia makes significant progress in business, economic and social development. Security and other historical challenges, though real, must not be allowed to stand in our way,” Ambassador Kamau said.

Kenya has in the recent past had a rocky relationship with Somalia over their Indian Ocean maritime dispute and claims of domestic interference.

eNaira app back on Google Store after 24-hour shutdown