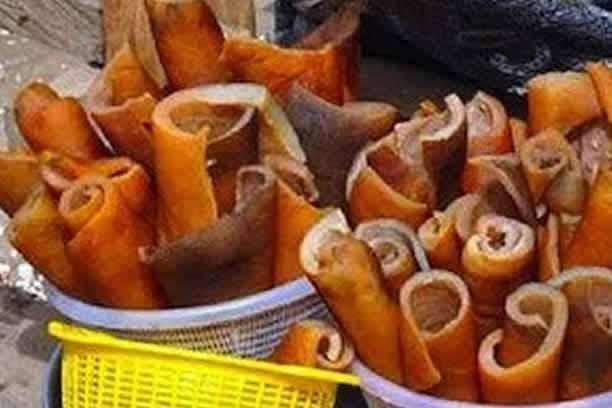 The National Agency for Food and Drug Administration and Control (NAFDAC) has warned Nigerians to exercise caution when buying animal hides, popularly known as Ponmo.

The agency made it known that it intercepted large quantities of dangerous ‘ponmo,’ disclosing that seven merchants of the deadly product have been arrested.

The Director General of NAFDAC, Prof. Mojisola Adeyeye alerted the general public, particularly consumers of ponmo against the activities of some unscrupulous businessmen and traders who were selling industrial animal hides as food articles.

She explained the hides were pre-treated with industrial chemicals which are not food grade and would be toxic and injurious to human health.

He noted that health hazards inherent in the consumption of such animal hides included risk of liver, kidney and heart damage, increased risk of aplastic anemia, central nervous system toxicity, cancer, amongst several others.

Adeyeye said: “NAFDAC wishes to advise consumers and retailers of ponmo not to patronise importers of hides and skins for consumable animal skins.

“The general public is hereby encouraged to be very vigilant and exercise discretion when purchasing animal hides ponmo and indeed other food items. NAFDAC is fully alive to her responsibilities of assuring the safety, wholesomeness, and quality of processed foods offered for sale to the public.”

“These hides and skins are then sold to unsuspecting public as consumable animal skin products, otherwise called Ponmo.

“Monitoring was also extended to some buyers who patronise the sellers and custodians of the warehouse, she said, adding that preliminary investigation revealed that some of the hides and skins were imported illegally and sometimes diverted to some merchants of death who re-process the hides and skins and further sell them as consumable ponmo to the public,” she added.

The NAFDAC boss disclosed that samples of the products have been sent to the laboratory for testing so as to ascertain the products quality and unwholesomeness.

According to her, the intervention would help the agency deal with the interaction and the dangers associated with the consumption of these products.

She explained that the street value of the product currently intercepted was estimated to be around N25.330 million only.