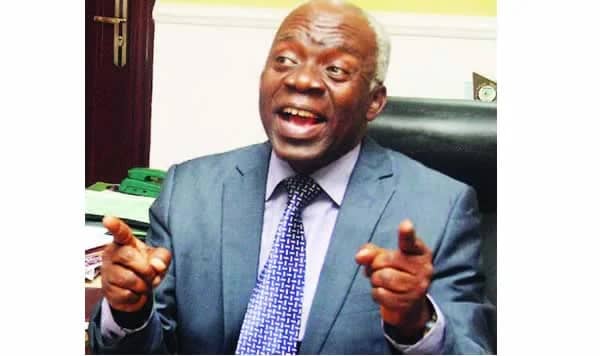 The Nigerian human rights lawyer, Femi Falana (SAN), has written to the President of Ghana and Chairman of the Economic Community of West African States, Nana Akufo-Addo, over continuous military coups usurping governments in West Africa.

According to his letter dated February 1, 2022, Falana urged Akufo-Addo to provide the leadership necessary for ECOWAS to adopt preventive measures to promote the rule of law, end impunity of political leaders, and ensure full respect for citizens human rights including socio-economic rights.

“Following the latest military coup and unconstitutional change of government the Republic of Burkina Faso has been suspended from the ECOWAS. The coup came on the heels of at least five previous coups from the member states of ECOWAS.

“Unfortunately, it has become routine for ECOWAS leaders to act after-the-fact rather than taking preventive measures to enforce respect for human rights, the rule of law, and end impunity of political leaders who frequently seek to change their national constitutions for personal gain.

“I am concerned that for many years, official impunity, abuse of human rights, grand and systemic corruption, flagrant disregard for the rule of law and grinding poverty arising from economic mismanagement have been pervasive throughout the sub-region, and indeed the African continent,” the letter read.

“It is unsurprising that many of these political leaders continue to act with impunity and do not fear condemnation and sanctions from the ECOWAS. It is disturbing to note that poverty is on the ascendancy in spite of the abundant resources of the member states of the ECOWAS.

“Furthermore, the lack of political will to respect human rights, reject impunity, and obey the rule of law is exacerbated by the fact that to date only six of the sixteen member states of ECOWAS have appointed implementing authorities’ to enforce the decisions and judgments of the ECOWAS Court of Justice in Abuja. The obligation of ECOWAS leadership to take preventive and effective measures to address democratic and rule of law deficits in several member states is a central part of the responsibility to protect.

“Secondly, the responsibility to react: to respond to situations of leaders of ECOWAS countries unlawfully changing national constitution to suit their personal ambitions, blatantly violating the human rights of their own people, and failing to obey the rule of law. Thirdly, the responsibility to rebuild a culture of respect for democratic principles, human rights and the rule of law.”

Falana stressed that failure to take effective and meaningful preventive measures to address these democratic and rule of law deficits would continue to undermine the legitimacy and ability of the ECOWAS to consistently deal with military coups and unconstitutional changes of government in the subregion.