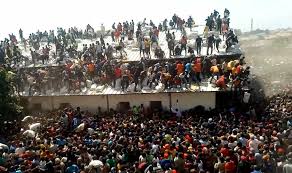 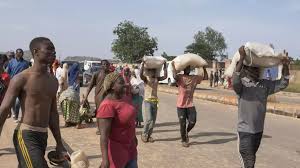 States across Nigeria have been experiencing series of looting from mobs following the infiltration of the once peaceful protest.

The extent of the looting spree which is novel in Nigeria has been operating unhindered.

The looting commenced after the historical incident which occurred in Lekki, Lagos State, on Tuesday. Hoodlums reportedly looted, razed and destroyed businesses and public facilities in the state on Wednesday.

Looters in other states in the country sprung up, destroying and stealing anything they could lay their hands on, it thereafter forced some governors to declare 24hours curfew.

It was gathered via pictures of incidents across states in Nigeria that the looters are mostly not the usually dreaded rogues with thuggish appearances and mannerisms. They are ordinary community members who reside in the cities and towns they have looted.

Among the looters were married women and men, with kids; unemployed and under-employed youth and petty traders who exploited the silence of law enforcement agencies to steal and destroy other people’s wares.

Nnamdi Obasi of the International Crisis Group was said to have linked the looting spree to the pre-existing problem of under-resourced police system and the demoralising effects of the recent attacks on the police.

“The lynching of policemen by mobs, sometimes in very gruesome circumstances, also means police themselves are vulnerable, particularly when they are deployed in small numbers. This must be very demoralising to many officers and should also be of great concern to citizens, ” Obasi said.

Video clips obtained by reporters of Premium Times depict a chaotic rush by mobs to steal without any restraint from state security forces or by the owners of the goods. The mobs have also been committing arson.

Places in Lagos that were visited by looters and hoodIums include: the palace of the Oba of Lagos, Rilwan Akinolu, was attacked and looted, Lagos High Court, Igbosere and retail businesses on the Island and Mainland.

A warehouse where food items were kept which was meant to alleviate hunger during COVID-19 restrictions was invaded at Mazamaza area of the state by thieves, who then looted it on Thursday.

The knowledge of the looting at Mazamaza encouraged residents of other states like: Adamawa, Plateau, Kaduna, Osun, Cross River, Ekiti and Ondo to go in search of similar warehouses.

Not only were COVID-19 palliatives were targeted, shops and malls were also broken into.

Speaking about Police’s response, it was gathered seven suspected individuals were arrested in ibadan for allegedly stealing brand new motorcycles, freezers and grinding machines, belonging to the lawmaker representing Oyo Central Senatorial District, Teslim Folarin.
According to him, those items were said to be kept for distribution to party supporters as “constituency projects.”

According to his media office, the items were procured for the Federal Cooperative College, Ibadan, as the senator’s constituency projects.

The state is currently on a 24hour curfew.

Looters in Ekiti State were also reported to have invaded the state’s Silo in hopes of getting COVID-19 palliative, they however took that which they met even though it was not what they expected. Thereafter, the state government warned looters that they had stolen items treated with dangerous chemicals, originally stored for planting.

Meanwhile, the African Union has called for thorough, fair and independent investigation of reports appearing to show the shooting of unarmed protesters by uniformed personnel and to ensure justice for victims and perpetrators alike.

The Economic, Social and Cultural Council (ECOSOCC) of the African Union(AU) stated that there is need for an urgent de-escalation of the current unrest in parts of Nigeria arising from recent protests against police brutality.

It added that all parties, including the government and protesting citizens, should come together around the table of dialogue and swiftly and peacefully resolve the current impasse to “prevent any further fragmentation of the national fabric”.

Millions hungry but drought overlooked as Kenya prepares to vote