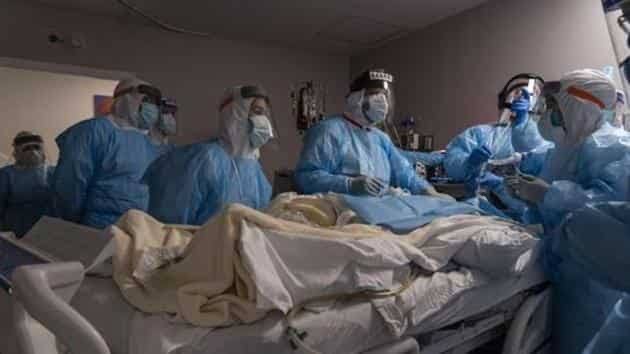 Schools and hotels in Madagascar are being transformed into hospitals as coronavirus cases surge on the Indian Ocean island.

The spike is most likely due to the South African variant, which has caused a second wave.

But as hospitals are overwhelmed, the makeshift treatment centres are also quickly getting full.

Hotels too are being used for the influx of patients as hospitals are overwhelmed.

Madagascar’s President was against Covid vaccines and stood by a locally made herbal infusion as a “cure”.

But last week the country joined the Covax programme.

Madagascar President Andry Rajoelina was initially strongly against Covid vaccines and stood by a locally made herbal infusion as a cure.

But after fierce criticism, the government took a U-turn and signed up for the global Covax programme.

“We had discussions, exchanges with Malagasy scientists and then we decided to go for vaccination,” said health minister Jean-Louis Rakotovao.

“This is another way to protect the population.”

The vaccination programme has yet to start and the government is still pushing its herbal infusion, which is based on the anti-malarial plant artemisia.

Dubbed Covid-Organics or CVO, it is sold in drink and capsule form and has been widely distributed to citizens.

Experts have cautioned against the brew, which has not been scientifically tested.

Madagascar, an island of around 27 million inhabitants, has recorded more than 24,600 coronavirus cases, including at least 433 deaths.

Western Cape on the up as department praises matric class of...

Man Dies due to ‘Extreme Orgasm’