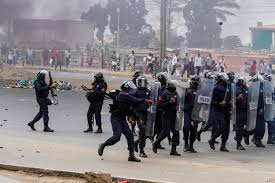 A co-founder of the Black Lives Matter movement in America, Opal Tometi along with other celebrities and activists have urged President Muhammadu Buhari to respect the constitutional rights of the Nigerian citizens to protest.

In an open letter published in the New York Times on Thursday to mark International Human Rights Day, they demanded that he hold accountable security personnel accused of shooting anti-police brutality protesters.

The letter, which come nearly two months after what witnesses and Amnesty International say was a fatal clash in Lagos between peaceful protesters and military and police was signed by actors like Kerry Washington, Danny Glover and Mark Ruffalo, as well as writers Afua Hirsch, Reni Eddo-Lodge, Naomi Klein and climate change campaigner Greta Thunberg.

The letter, also signed by supporters, asks the government to release jailed protesters, lift a ban on protests and allow an independent human rights monitor investigation into “the actions that led to the killings at Lekki Toll Gate.”

“We cannot stay silent,” they added.