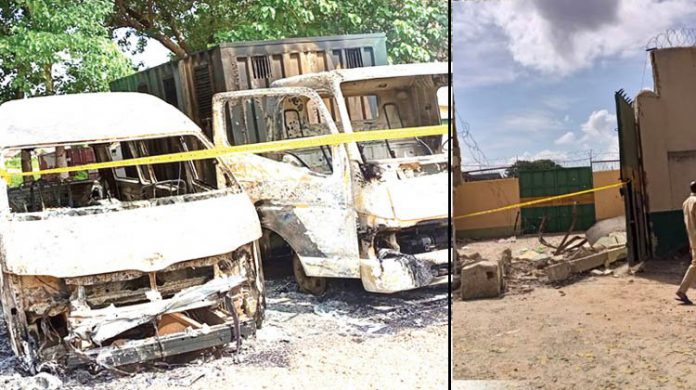 879 inmates reportedly escaped from the Kuje Custodial Centre, while 421 have been recaptured; 454 are still out there.

This was confirmed by the House of Representatives’ committee on Correctional service.

The committee invited the Minister of Interior, Rauf Aregbesola; and Comptroller-General of the NCoS, Haliru Nababa and Commander of the Nigerian Army Platoon on duty on the night of the attack.

Chairman of the committee on Correctional Service, Edwin Anayo, who disclosed this during an oversight visit to the facility on Thursday, said the lawmakers met 115 inmates.

“If you subtract it, it will give about 879 that escaped that night,” he noted.

The inmates, including 69 suspected Boko Haram members, had escaped Kuje Medium Custodial Centre on Tuesday last week after members of the Islamic for West Africa Province attacked the facility.

“We are summoning the CG and the minister in charge of this agency to come to the National Assembly and explain to the whole world and Nigerians what is going on.

“In Abuja, nobody walks freely now because of this incident. We have to interact and know the problem, and how we can solve them.

“We have to know your challenges and how to tackle them. The committee is eager to know what transpired here. The reaction of the security agencies.

“After inviting the CG with his team and the minister, we will also invite the leader of the Army team on that day.

“We are summoning the CG with his team, and the minister with his team to know more about what transpired on that fateful day that the incident happened.”

Majority of Kenyans have confidence IEBC will conduct credible polls –...