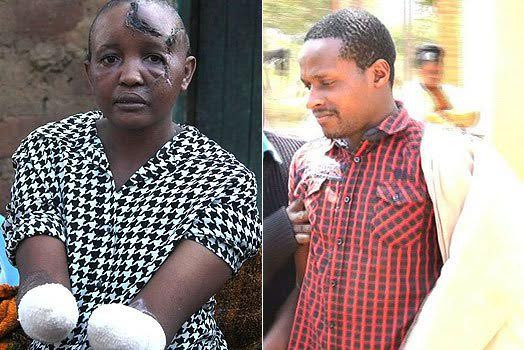 A Kenyan man has been sentenced to 30 years in jail for attempted murder after he chopped off his wife’s hands for not giving birth.

LIB recalled that in what was described as the most atrocious cases of domestic violence, Stephen Ngila chopped off Jackline Mwende’s hands with a machete in Machakos County on July 25, 2016, because she couldn’t conceive after seven years of marriage.

Ngila, now 39, was given the sentence on Tuesday, February 9, after he was found guilty. He was however granted 14 days to appeal the ruling.

In her judgment, Machakos Law Court Justice Brenda Bartoo said the court had taken note the accused was not remorseful for the offense he was convicted of.

“The court notes that the offense committed was grave, and the victim in the statement does not wish for any restitution,” she outlined while giving factors that informed the term.

“Therefore I proceed and sentence you for the offense of attempted murder contrary to section 220(A) of penal code,” she added in her judgement.

All Tunisian Immigrants in Libya will be released, Tunisian Ambassador vows