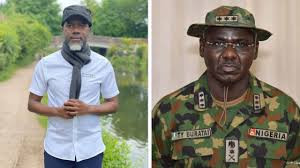 The Nigerian army, in the process of being cross-examined, has admitted bringing live bullets to the Lekki tollgate where a controversial shooting took place on October 20, 2020.

This was confirmed by Ibrahim Taiwo, commander of the 81 division of the Nigerian Army while being cross-examined by Olumide Fusika, a senior advocate of Nigeria (SAN) before the Lagos judicial panel on Saturday, November 21.

Taiwo who said the live bullets were for the protection of the army team that was deployed to restore order in the area, averred that the soldiers who opened fire used blank bullets. He also disclosed that their colleagues with live rounds were on the ground to protect from suspected hoodlums who fomented trouble.

Moreover, Commander 81 of the Military Intelligence Brigade, Brigadier-General AI Taiwo, explained why the military initially denied its personnel involved in the October 20 shooting at the Lekki tollgate.

It should be recalled that shortly after the incident on October 20, the Nigerian Army via its Twitter handle, denied the involvement of its officers.

While testifying before the Lagos State Judicial panel, Taiwo said the military initially denied because it did not have its fact available.
”The first statement was born out of the fact that we did not have the facts available to us and the second was because nobody was sent to the Lekki tollgate to break up any protest” he said

The former Presidential aide reacted via his Twitter handle:

‘“The @HQNigerianArmy’s account of their involvement in #LekkiMassacre is as straight as Bob Risky. It is constantly changing as the complexion of some Nollywood actresses. It is as real as a #BBNaija female housemate’s back.”

July unrest showed how easy it was for groups to cause...

UN extends Arms Embargo on CAR for another Year