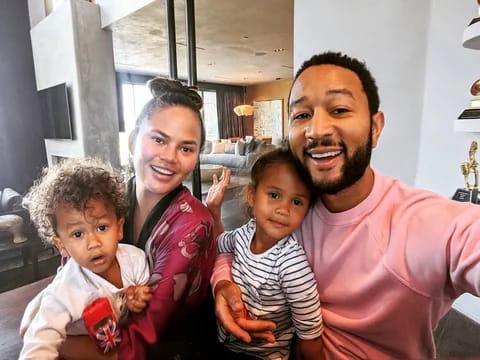 The wife of the renowned singer, John Legend has been hospitlised due to complication during pregnancy.

The wife, who is identified as Chrissy Teigen was said to be suffering bleeding during pregnancy.

Teigen, the mother of two revealed that she has been bleeding for over a month.

She made this known via her Instagram stories on Monday, September 27, where she disclosed what actually happened.

“We all know I’ve been on bed rest for a few weeks and that’s like super serious bed rest. I get up to quickly pee and that’s it, I take baths twice a week, no showering, just as little as possible,” she said.

“But I was always, always bleeding. I’m about halfway through pregnancy and the blood has been going on for about a month, maybe a little bit less than a month. We’re talking like more than your period, girls, it’s definitely not spotting. A lot of people spot but it’s usually fine. Mine was a lot.”

She however ended with the reassurance that she is doing well.

The couple tied conjugal knots in 2013 after meeting on the set of his music video for “Stereo” in 2007.

They have two children, Luna and Miles.

The couple had earlier announced (Since August) that they were expecting their third child.