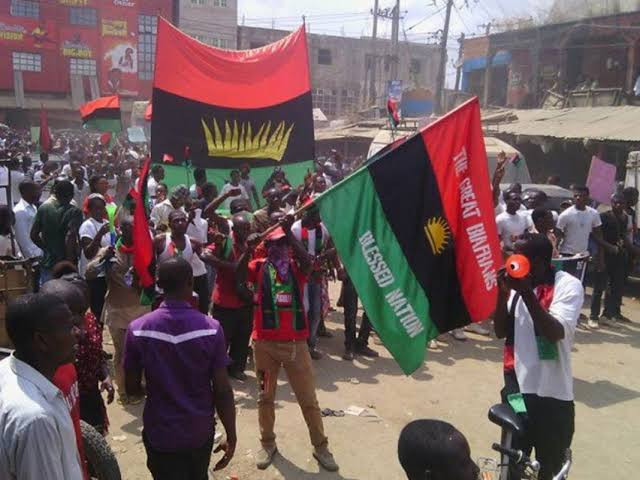 The Indigenous People of Biafra (IPOB), has banned the singing of Nigeria’s national anthem in schools across the Southeast.

IPOB’s Head of Directorate of State, Chika Edoziem, made the announcement as part of its action plan for the year 2022.

He also announced the ban on the use of “Fulani cows” during festive seasons in the Southeast.

Edoziem affirmed that IPOB would campaign for the unconditional release of its leader, Nnamdi Kanu.

Edoziem said IPOB members should prepare for a worldwide protest with a focus on the British Embassy, Nigerian Embassy, Kenyan Embassy, and the United Nations.

“The following are some of the programs and actions which the leadership will vigorously pursue in 2022.

“These are the ones we can make public for now. Others will be made known at the appropriate time.

“Worldwide campaign for the unconditional release of Onyendu Mazi Nnamdi Kanu (A Prisoner of Conscience). The Campaign will be called THE PRISONER OF CONSCIENCE CAMPAIGN. In furtherance of this CAMPAIGN, all IPOB family members, Biafrans and friends of Biafra are hereby urged to change their profile pictures on social media with our official campaign poster.

“Secondly all IPOB families worldwide are hereby directed to activate the earlier instruction passed down to them. We shall embark on a worldwide protest in cities and capitals around the world. The focus of our protest shall be British Embassies, the British Parliament, 10 downing street, the Kenyan Embassies, the Zoo Nigerian Embassies and International Organizations like the UN, the EU, Amnesty International and Media houses.”

The statement added: “The DOS will be creating a new department in IPOB to add to those already existing under the Directorate of State. The department will be designated as IPOB EDUCATION DEPARTMENT. Primary responsibility is to teach our history, language, tradition and culture to our children. We have about three books that will be published this new year in furtherance of this. After the head of this department is made public, Biafran writers will be called upon to bring forward books and educational materials to be published for our children in primary and secondary schools.

“Beginning from tonight, no more Nigerian National Anthems in all Schools in Biafraland. Our Children must no longer be reminded daily that they are under oppression by singing the national anthem of the oppressor. School authorities and proprietors have a responsibility to teach our children our national anthem. The Biafran National Anthem.

“The ban placed on Fulani cows will take effect in April 2022. Effective this month Fulani cows will not be used for any social or ceremonial events and festivals in Biafraland. Our native cows will be used instead for these events Traditional Custodians of our Culture, the Clergy and Town Unions must ensure that this message gets to the grassroots. We cannot continue to eat and bring cause and damnation upon our land and upon ourselves by consuming cows that were used for bestiality.”

Pokuase interchange adjudged most commendable project of the year at FIDIC...