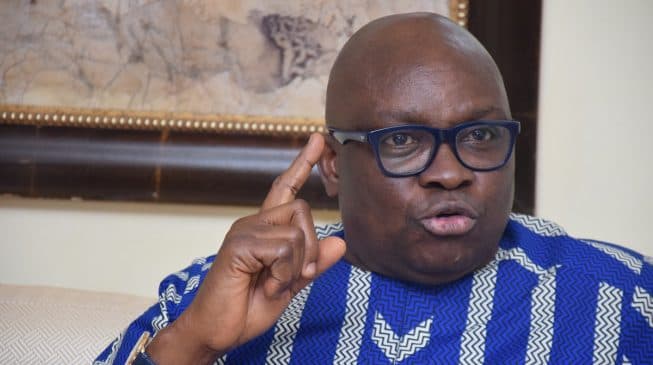 Ayodele Fayose, who was once a Governor of Ekiti State, has stated that he will appoint “Minister of Stomach Infrastructure” if he emerges president of Nigeria.

Fayose made this assertion while speaking with newsmen, shortly after his appearance before the Peoples Democratic Party (PDP)’s Presidential Screening Committee in Abuja, on Friday.

When the committee asked him about his stomach infrastructure policy while he was governor of Ekiti State, he confirmed that it would be part of his policies if he emerged president.

“I made it clear that I will have a minister of stomach infrastructure and welfare of the people,” he said.

He explained that as much as tarring roads and providing other infrastructure was good, that would not be sufficient for hungry citizens.

“So, for me, stomach infrastructure is part of being supportive of the ordinary Nigerian.

“Stomach infrastructure under my watch as president of Nigeria, will be a major theme.

“No one is saying here that you will not do the needful in terms of developing the country, part of development is the welfare and well-being of the people.”