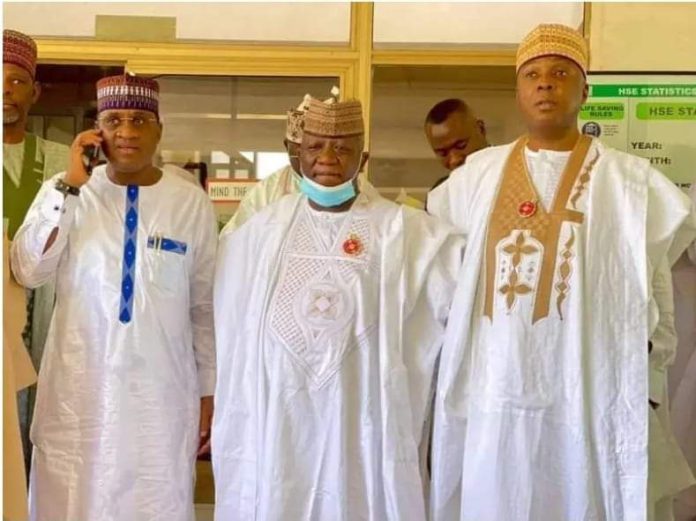 Ahead of the 2023 general elections, the immediate past Governor of Zamfara State, Hon Abdulaziz Yari, Senator Kabiru Marafa, and their supporters are set to join the opposition Peoples Democratic Party (PDP).

According to a high ranking member of the PDP who disclosed that Yari and Marafa and their supporters were at the meeting with two leaders of PDP former Vice President Alhaji Atiku Abubakar and former Senate President Senator Bukola Saraki.

The meeting between Yari, Marafa and their supporters was held in Saraki’s Maitama residence was said to have yielded fruitful results and they have concluded plans with the leadership of PDP to join the opposition party with his supporters in Zamfara State.

The conditions and modalities of joining the party are not yet clear at the time of filing this story.

If Dr Dauda Lawal refused to join PDP, he is the only one remaining among the members of G8 lingering as a political orphan.

Abdulazeez Yari would assume the new role of the leader of the Peoples Democratic Party ( PDP) in Zamfara State and he will replace the current Deputy Governor of Zamfara State Barr Mahadi Aliyu Gusau, who is the leader of PDP after the defection of Governor Bello Mattawalle Maradun to All Progressives Congress (APC).

However, we are yet to ascertain if the former governor would contest for any position under his new party in the 2023 General elections.

Meanwhile, it was speculated earlier that he will be joining, but that did not happen, however following his separate meeting
with the Former Vice president Atiku Abubakar and former Senate President, Senator Bukola Saraki in his residence in Maitama Abuja and all preparations are in top gear for his formal defection from the ruling All Progressives Congress APC to PDP as soon as possible.

According to the source “however, we have not confirmed the time of the defection, but we have gathered that the former Governor would hold a stakeholder meeting in Kaduna and Talata Mafara to make his intentions known to his supporters in the state to make a public announcement of his planned defection to the PDP before his next meeting with the National leadership of PDP, Atiku Abubakar and the Bukola Saraki.