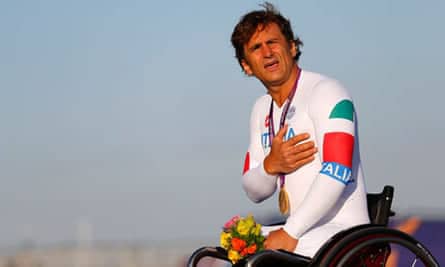 Following an accident during a handbike relay where he suffered a severe head injury in a crash with a lorry, Former Formula One driver Alex Zanardi, 53, is in a serious condition in a hospital in Italy.

The Santa Maria alle Scotte hospital in Siena said he was transported by helicopter from Pienza and underwent emergency neurosurgery before being moved to intensive care.

The hospital added Zanardi, who had both legs amputated following a crash in 2001, remains in a “very serious” condition.

The Italian is a four-time Paralympic champion hand cyclist who was taking part in the Obiettivo Tricolore event, which sees participants journey across Italy on handbikes, wheelchairs or cycles.

A host of prominent figures from the racing world and beyond have taken to social media to send Zanardi their well-wishes, Sportsmole noted.

PHOTOS: Buhari Commissions Boulevard Named After Him In Niger Republic