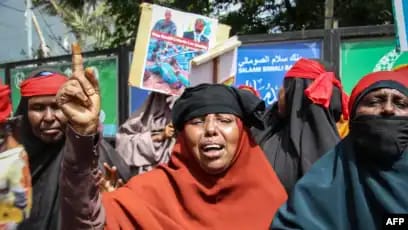 The first batch of several thousand Somali troops that were sent to Eritrea for training in 2019 and 2020 have returned back to Mogadishu.

The arrival of this contingent in Mogadishu comes a day after Somalia’s president, Hassan Sheikh Mohamud, said soldiers trained in Eritrea would return to their country during the month of December.

At a news conference, Minister of Defense Abdulkadir Mohamed Nur said the return of the troops is good news for Somalis because these troops will be deployed in the fight against militant group al-Shabab.

“Our first batch of troops who were in Eritrea for training arrived today, and the remaining soldiers will arrive in the coming days to join the fight against the militant group known as Khawaarij.”

The Somali government recently began referring to al-Shabab as Khawaarij, an Arabic term for one who deviates from true Islam.

It was gathered that after their arrival, the troops were escorted to a secure section of the airport, where they camp until they are sent to an undisclosed base.

Partnering with men and boys to end FGM: A call to...

Bulldog and I fight a lot — Vanilla on relationship with...

Eskom to offer staff incentives for keeping the lights on

9-year-old Nigerian boy, becomes one of the youngest ever high school...