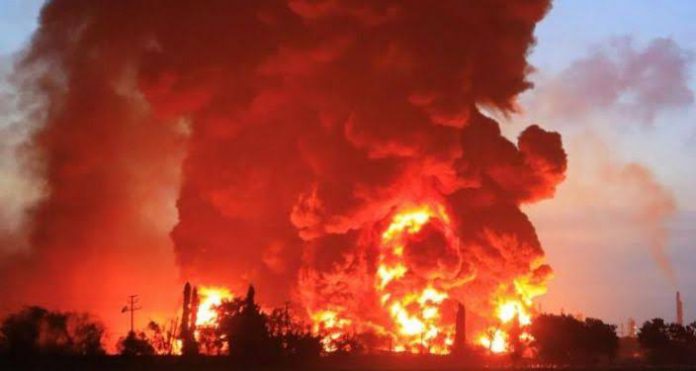 Over 100 youths have been burnt in a fire outbreak that started at 11 pm in an illegal crude oil bunkering site at Abaezi forest, in Ohaji-Egbema Local Government Area of Imo State.

The State Commissioner for Petroleum Resources, Goodluck Opiah, confirmed it in a telephone interview with The Network.

Opiah said that all the victims numbering over 100 were burnt beyond recognition.

He said, “it is true that a fire incident occurred at Ohaji/Egbema Local Area of Imo State.

“The fire outbreak occurred at an illegal bunkering site and it affected over 100 people who were burnt beyond recognition. “

“At the moment, I can’t really confirm the number of the deceased because many family members have removed the corpses of so many others.”

Opiah, a former Speaker of the House of Representatives who represents the area said he was at the tragic scene to represent Governor Hope Uzodinma of Imo State.

“Apart from this calamity, the act has destroyed the aquatic life of the community. Our people before now are predominantly farmers and fishermen.

“Most of the people who are engaging in this act are from Rivers, Bayelsa and other neighbouring states and it is sabotage for our people to allow this illegal activity to continue.

“I wish to appeal to our youths to desist from making themselves available for this illegal act. This is a suicidal business they got themselves into.

An eyewitness said they were woken up by the ball of flames in the Abaezi forest.

According to him, a lot of people were visibly seen inside, but not one person came out.

Residents who managed to get closer to the scene said the charred bodies were more than 100 while those with fire burns have been rushed to the hospital for treatment.

“Being a virgin at 25 is just embarrassing not a flex”...

25 People, including Children were killed in blast at illegal oil...