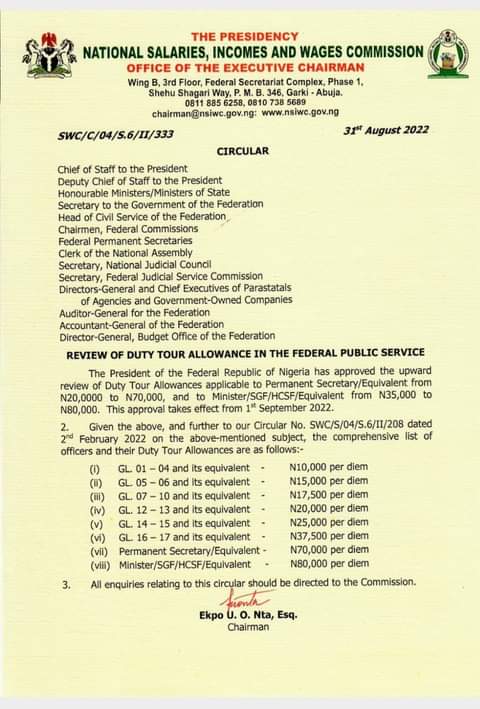 The Federal Government has approved the upward review of Duty Tour Allowance (DTA) for Ministers, Permanent Secretary and civil servants from Grade Level 01 to 17.

The circular was addressed to the Chief of Staff to the President, Deputy Chief of Staff to the President, Honourable Ministers/Ministers of State, Secretary to the Government of the Federation, Head of Civil Service of the Federation, Chairmen, Federal Commissions, Federal Permanent Secretaries, Clerk of the National Assembly and other heads of government agencies.

Nta said President Muhammadu Buhari had approved the upward review of the DTA from N20,000 to N70,000 for Permanent Secretary/Equivalent and N35,000 to N80,000 for Minister/SGF/HCSF/Equivalent, adding that the approval takes effect from 1st, September 2022.

The circular reads: “The President of the Federal Republic of Nigeria has approved the upward review of Duty Tour Allowances applicable to Permanent Secretary/Equivalent from N20,000 to N70,000 and Minister/SGF/HCSF/Equivalent from N35,000 to N80,000. This approval takes effect from 1st September 2022.

“Given the above, and further to our circular no SWC/S/04/S.6/II/208 dated 2nd February 2022 on the above-mentioned subject, the comprehensive list of officers and their Duty Tour Allowances are as follows;

“All enquiries relating to this circular should be directed to the Commission,” the circular stated.

It would be recalled that Nigeria faces severe economic problems, which have seen government revenue plummet while its debt has ballooned.

The government’s 2022 budget has a deficit of over N7 trillion, and debt servicing has surpassed revenue this year.

Personnel costs for civil servants and the overhead costs of thousands of offices are amongst the areas where the government spends the most on, drawing calls for reduced cost of governance. Capital projects that reach majority of the population have received less over the years.

Serial housebreaker convicted after breaking into Hawks offices in Mpumalanga

WATCH: ‘Eskom, our laptops are like fridges’ – student’s plea goes...