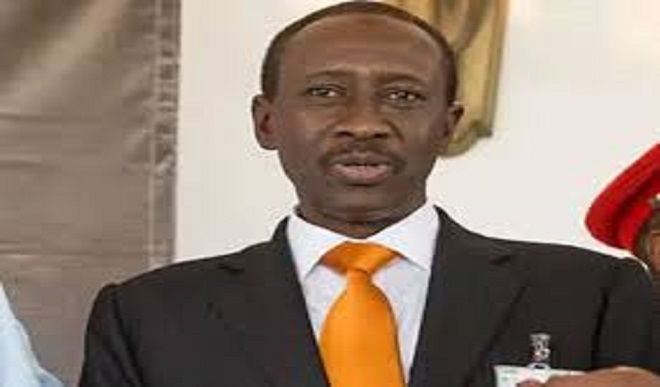 The National Security Adviser, Maj. Gen. Babagana Mongonu (retd) has announced the death of Malam Bako, the successor of Abu Musab Al-Barnawi, the leader of the Islamic State of West African Province (ISWAP).

Mongonu disclosed this when he addressed State House correspondents on the outcome of the meeting of security chiefs, presided over by President Muhammadu Buhari, at the State House, Abuja, on Thursday.

Monguno said, “The land forces have done an excellent job within the last one month because with their effort, we have been able to take out the leaders of Islamic State West Africa Province, Abu Mussab Al-Barnawi.

“Two days ago, the man who succeeded him, one Malam Bako, who is also one of the prominent leaders of Shira Council of ISWAP was also taken out, which means the insurgents are now contending with leadership.”

The NSA said Nigeria was working to settle 15,852 repentant terrorists following the successes recorded by the military in the North East.

“We have had a steady increase in the number of returnees; both combatants and non-combatants form the Islamic State West Africa Province and Boko Haram enclaves. We now have to contend with 15,852 returnees,” he said.

He said the various operations put in place by the military in some troubled parts of the country were yielding the desired results by putting a lot of pressure on insurgents and bandits.

Monguno also revealed that the DSS had also arrested the notorious gangster in Benue State known as Ghana and that his successor, Chekere Kefas Aondofa, had also been arrested.

The Minister of Police Affairs, Maigari Dingyadi, also said that progress had been made in the area of maintenance of peace and security in the country.

He said bandits were relocating to areas where there was no means of communication.

Asked about what the government was doing to stop the insecurity moving from Zamfara and Kaduna to Sokoto, he said, “Well, we looked at that, and the reports coming in are indicating that even though the bandits are there, they’re moving towards areas where there are no communications that they can talk to people. But the situation is improving even in those areas. Of course, the situation is still not as good as we except it to be. But we are on top of the situation.”

AFCON Round Of 16: Super Eagles May Face Algeria, Senegal, Tunisia

Aisha Buhari reacts to the abduction of schoolgirls as she wishes...