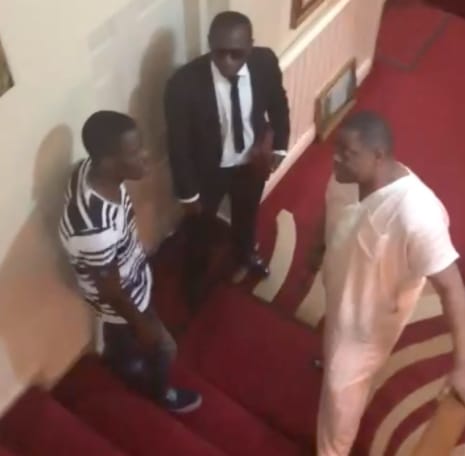 Sahara Reporters has earlier released a video claiming it shows former Minister of Aviation, Femi Fani-Kayode, FFK allegedly threatening his former personal assistant with a hammer in his hand.

The video was filmed by his estranged wife, Precious Chikwendu, and it could be at the end of the video that he is holding a hammer.

FFK has however released a statement denying that he threatened his former PA with a hammer.

His statement reads in part:

“The allegation that Chief Femi Fani-Kayode is a violent man that threatened any of his staff with a hammer is false.

The video was doctored with a fake voiceover 3 years after the event took place to give a false narrative.

There was no threat or assault on the individual in the video and he has come out to say so publicly. He has also pointed the finger at the individual who doctored and sponsored this video and accused her of trying to kill him on several occassions.

The video of his testimony is above. It is pertinent to note that the video was shot in 2018 and Chief Fani-Kayode had no idea that his estranged wife was filming him.

She did the voiceover in 2021 purposely to damage him and portray him in a bad light.

The reason he had a hammer in his hand was because he and his staff were hanging new pictures on the wall in his sitting room and the two individuals that were in the video with Chief Fani-Kayode have attested to this.

She lied about everything and she is nothing but a disturbed, sorry and embittered soul.

Chief Fani-Kayode has instituted both criminal and civil proceedings against her for her falsehood so she will have every opportunity to prove her wild allegations in court just as the other individuals that swore to fake affidavits against Chief Fani-Kayode, commit perjury against him and that were paid to orchestrate these malicious falsehoods will.

The whole thing is a well-orchestrated, well-funded smear campaign to tarnish FFK’s image but he remains undeterred.

Those behind it will be brought to justice and they will be exposed. We look forward to seeing them in court.”

The former PA also made a video denying the claim that the former minister threatened to attack him.

Only Yoruba Obas can decide if there will be Oduduwa nation...

Teenage girl abducts boy in Adamawa, attempts to sell him to...