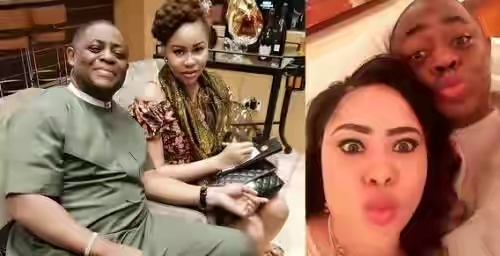 A family member of Fani Kayode disclosed how the ex-minister, popularly known as FFK caught his wife, Precious Chikwendu in bed with a Naval Officer identified as Idenyi Akpa.

According to the source, “There is a video in which the young man admitted being in bed with Precious and in which he stated how she lured him to the hotel. The young man is married with three children. The matter was reported to Asokoro Police Station where both the young man and Precious were detained.

“They were also allegedly planning to kill FFK and evidence was provided. FFK insisted that all charges should be dropped and forgave them both. Even treated the young man with kindness and ensured that no one beat or attacked him after they were caught. The young man’s parents and family have been offering deliverance prayers for the navy officer since because they know that Precious is an evil destroyer.”

The source revealed that, “Major Gen. Patrick Akpa (rtd.) is the father of the young man that was caught in bed with Precious in an Abuja hotel last December. He was a former commandant of NDA. The young man’s name is Navy Captain Idenyi Akpa.

The source further explained that Precious, who was once a beauty queen has a long history of mental disorder and diagnosed as a ‘acute bi-polar disorder and syzchoprehnia’ patient.

“The psychiatrist in whose hospital Precious was admitted for just under one month for mental health care and treatment was Dr Udenze who is a highly respected doctor and who has hospitals in both the UK and Nigeria. The doctor that referred her to the hospital recommended her admission and treated her as an out patient after she was released by FFK against doctor’s orders was Dr Bose Ominiyi of National Hospital, Abuja,” he stated.

It should be recalled that Fani-Kayode has trended in the news weeks ago regarding his verbal assault on a journalist.

Meanwhile, he recently separated from his wife Precious, who happens to be his fourth wife, after six years of marriage.

It was gathered that the former minister physically abuses his wives (Precious’s predecessors), not excluding Precious who got a share of it starting from her first year of marriage with him.

It was said that the ex-minister instructed Precious to abort her last pregnancy, claiming that it was not his. Precious did not do his bidding and was reported to have been beaten mercilessly for her disobedience.
The source also revealed that the woman was always being hit in the presence of their househelps and sometimes threatened with gun to make her refrain from screaming.