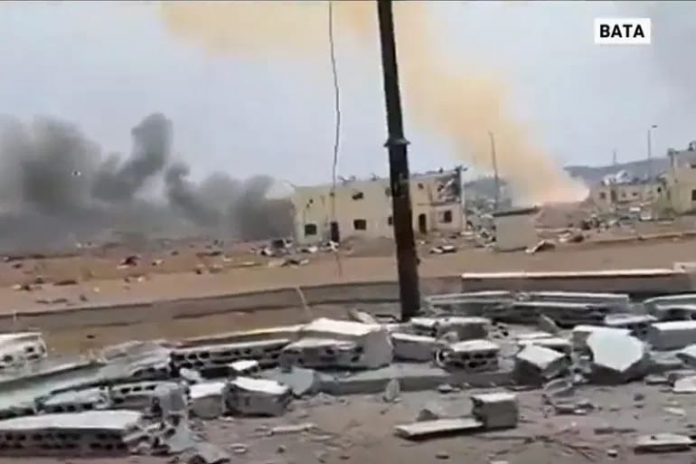 A series of large explosions at a military base rocked the city of Bata in Equatorial Guinea on Sunday, killing at least 20 people and injuring hundreds.

The cause of the blasts was not yet known. A defence official told television station TVGE that authorities had ruled out an attack.

TVGE showed teams pulling people from piles of rubble, some of whom were carried away wrapped in bed sheets. It said 420 people were injured, citing a local health official.

Pick-up trucks filled with survivors, including children, drove up to the front of a local hospital.

Inside, wards were overwhelmed with the wounded, many covered in blood. Some lay on the floor or on tables, awaiting attention.

There has been call for people to donate blood and said hospitals in the Central African nation were full.

In the blast area, iron roofs were ripped off houses and lay twisted amid the rubble. Only a wall or two remained of most residences.

In the immediate aftermath, people ran in all directions, many of them dazed and screaming.

A column of smoke reached into the sky and around its base firefighters sought to put out the the blaze.

“Following developments in Equatorial Guinea with concern after the explosions in the city of Bata,” Spanish Foreign Minister Arancha Gonzalez Laya said on Twitter.

The Spanish Embassy in Malabo advised Spanish nationals to stay in their homes.

The blast comes as Equatorial Guinea, an oil producer, is suffering a double economic shock because of the coronavirus pandemic and a drop in the price of crude, which provides around three-quarters of state revenue.