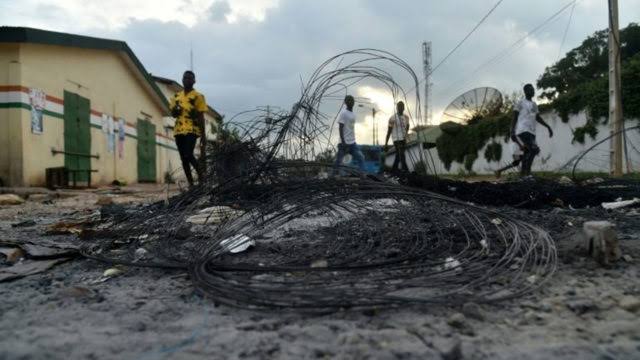 An ethnic clash ensued in Ivory Coast after President Alassane Ouattara made an announcement that he would run for a third term, this have led to the death of at least two people.

A hospital source and local residents made this known to AFP yesterday [Sunday].

“One person evacuated to the regional hospital succumbed to their injuries and died this morning,” said a hospital source in Divo, adding that “several were badly wounded with machetes”.

In line with the report, young opposition supporters on Saturday took to the streets to voice loud and violent protest in several major cities, especially the southern cocoa-growing hub of Divo, after Ouattara accepted his party’s nomination for the October poll.

Several local people also said they had seen the body of a teenager killed in a fire in a local bar.

Ouattara was officially anointed as candidate by his ruling RHDP despite having already served two terms – the maximum permitted under the constitution – since 2010.

He had planned to hand the reins to prime minister Amadou Gon Coulibaly, but his presumed successor died of a heart attack in July.

Six people had already died in violence following Ouattara’s August 6 announcement that he would run again, while 100 were hurt.

Login Govt bans operation of Brothels, use of Nose Mask