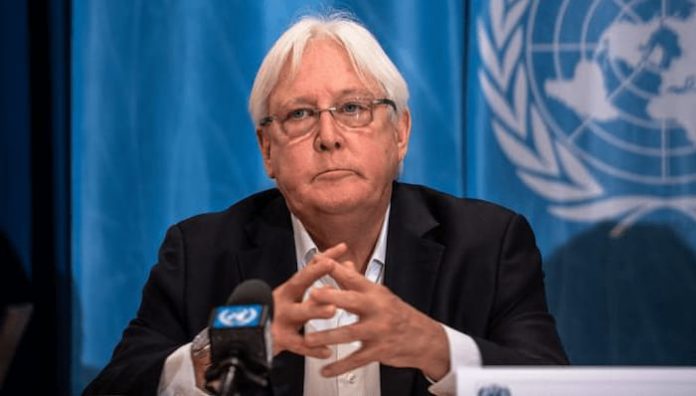 The United Nations humanitarian chief, Martin Griffiths described the crisis in Ethiopia as a “stain on our conscience”.

It was gathered that children and others starve to death in the Tigray region under what the U.N. has called a de facto government blockade of food, medical supplies and fuel.

In an interview with The Associated Press Tuesday, Martin Griffiths issued one of the most sharply worded criticisms yet of the world’s worst hunger crisis in a decade after nearly a year of war. Memories of the 1980s famine in Ethiopia, which killed some 1 million people and whose images shocked the world, are vivid in his mind, “and we fervently hope is not happening at present,” he said.

“That’s what keeps people awake at night,” Griffiths said, “is worrying about whether that’s what is in prospect, and in prospect soon.”

“So people have been eating roots and flowers and plants instead of a normal steady meal,” he said.

“The lack of food will mean that people will start to die.”

The UN humanitarian chief, who recently visited Tigray, cited the lack of medical supplies and noted that vulnerable children and pregnant or lactating mothers are often the first to die of disease. Some 200,000 children throughout the region have missed vaccinations since the war began.

And the lack of fuel — “pretty well down to zero now,” Griffiths said — means the U.N. and other humanitarian groups are finding it all but impossible to reach people throughout Tigray or even to know the true scale of need.

Phone, internet and banking services have also been cut off.

Ethiopia will see the formation of a new government next week with another five years in office for the prime minister. Griffiths, who said he last spoke with Abiy three or four weeks ago, expressed hope for a change of direction.

“We’d all like to see is with that election inauguration, that we would see new leadership leading Ethiopia away from the abyss that it’s peering into at the moment, that the national dialogue process which he discussed with me in the past, and his deputy discussed with me last week, that needs to happen,” Griffiths said.

Fuel prices remain unchanged for the next one month

Who will be Kenya’s fifth President? Anxious wait as IEBC prepares...