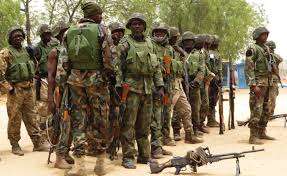 The Nigerian Army has refused to release the identities of soldiers deployed to Lekki tollgate on October 20, explaining that it was unprofessional for the army to release the names of the said individuals.

This was said during an interview with Punch, in which Osoba Olaniyi, spokesman of the 81 division of the Nigerian Army, said,

Olaniyi also affirmed that the Army will only appear before the judicial panel set up by the Lagos state government to investigate allegations of police brutality in the state as well as the October 20 Lekki tollgate gunfire incident, if the invitation is coming from the state government and not the panel.

“If we receive a letter from the state, we will go. Are we not under civil authorities? Are we not part of Nigerians? Have you forgotten that we did not go there (Lekki tollgate) on our own?

“It is not the duty of the members of the panel to tell us that. If the state wants the (81) Division to come, they will write and we will oblige. See, if they have written to the division, it is our duty to go. It is not for them to go through the media as if we are scared of coming.

“It is the state government that constituted that panel of inquiry. So if anybody needs to get in touch with us to come, it is still the state and not members of the panel,” he explained.

The Nigerian Army had earlier denied being responsible for the incident. In separate tweets, the army had labeled the reports of soldiers opening fire at the tollgate as fake news.

In a statement released last week, Olaniyi confirmed that soldiers from the division were the ones who carried out the operation. He said they were deployed to the tollgate on the request of the Lagos state government and that they also did not shoot any protester.

“At no time did soldiers of the Nigerian Army open fire on any civilian. From the onset of the ENDSARS protest, there was no time personnel of 81 Division Nigerian Army Lagos were involved.

Meanwhile, the Lagos state government is yet to react to the Military’s claim that it requested the deployment of soldiers to the tollgate.

Governor Sanwo-Olu has however repeatedly emphasized that he had no hand in the deployment of the military as it wasn’t within his jurisdiction to call in the military.

Third Mainland Bridge to be reopened fully this weekend