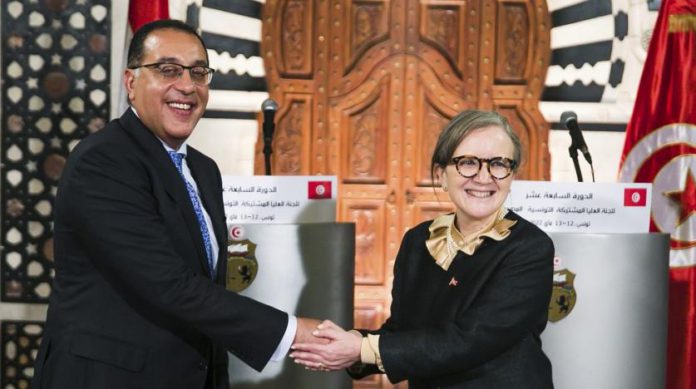 Egypt and Tunisia have agreed to coordinate and hold consultations over regional and international developments.

The meetings witnessed the signing of a number of agreements on bolstering bilateral ties.

During a press conference with Madbouly, Bouden underscored the role of the private sector in boosting bilateral coordination between Tunis and Cairo, creating partnerships between businessmen and moving towards promising markets, especially in Africa.

She expressed her satisfaction with the level of coordination and consultations between Egypt and Tunisia and the ongoing contacts between their leaderships.

She said she was looking forward to bolstering these ties and coordinating high-level visits by senior officials amid global changes and joint challenges faced by their countries.

Moreover, Bouden and Madbouly tackled the Russian war on Ukraine and its impact on grain imports, which demands joint work and exploring new markets.

Madbouly and Bouden also stressed the need for all foreign forces, mercenaries and fighters to withdraw from Libya within a specified timeframe, in line with relevant United Nations Security Council resolutions and the Berlin and Paris conferences.

AfDB, Others Pledge US$17 Billion To Increase Food Security In Africa

Kenya loses one child to pneumonia every hour — Ministry of...