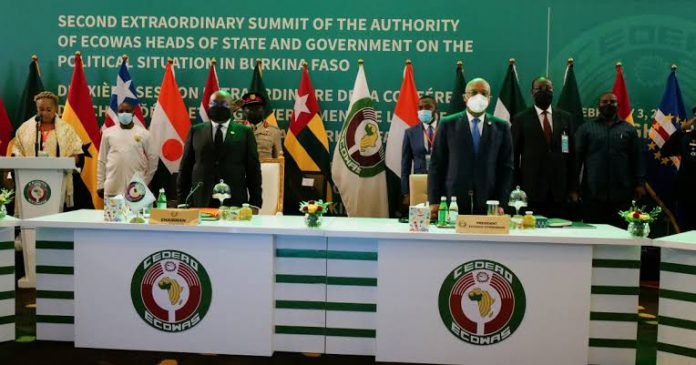 The Economic Community of West African States (ECOWAS) has instructed the military regime in Burkina Faso to immediately release a timetable for the return of the country to constitutional rule.

According to ECOWAS, there is a deterioration of the security and humanitarian situation in the country which calls for a quick return to constitutional order.

Burkina Faso’s return to constitutional rule, the Authority noted in a press release after an emergency meeting on Thursday, would help to deal effectively with these issues.

“(The Authority) calls on the military authorities to establish the Transition institutions, adopt a transition calendar and facilitate the return to constitutional order as soon as possible.”

ECOWAS again instructed, “the Commission to ensure continuous engagement with the new authorities through the establishment of a monitoring mechanism, including African Union and United Nations, with a view to accompanying the Transition process.”

UN chief António Guterres condemned the coup and called on the military to “ensure the protection and the physical integrity” of Mr Kaboré.

The African Union and regional bloc, ECOWAS, also condemned the forceful takeover of power, with Ecowas saying it holds the soldiers responsible for the deposed president’s well-being.

The Authority also suspended Burkina Faso from all ECOWAS Institutions until the restoration of constitutional order.

After the meeting on Thursday, February 3, the regional bloc did not only uphold its decision to suspend Burkina Faso but also demanded the release of President Roch Kabore.