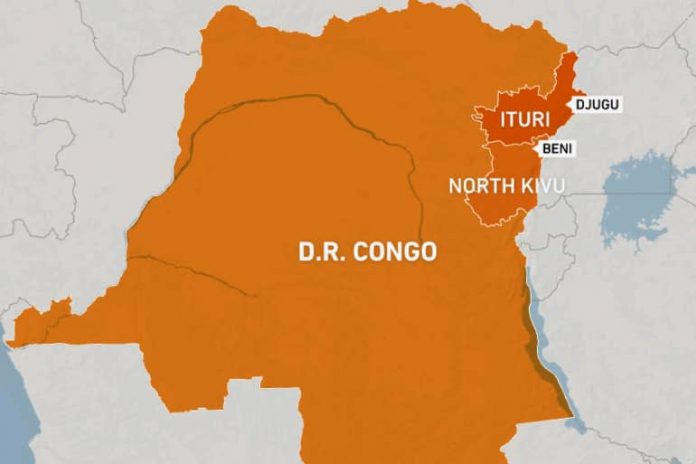 Fourteen people, including seven children, have been killed with machetes in the Democratic Republic of the Congo, the Red Cross has said, as a community leader blamed a notorious armed group for the bloody attack.

According to the humanitarian aid group, the attack took place in a displaced people’s camp in the country’s northwestern Ituri province on Saturday.

Among the victims were five women aged between 25 and 32 and a two-year-old girl, according to a list revealed by the Red Cross.

Jean D’Zba Banju, a community leader in Ituri’s Djugu area, said the perpetrators belonged to the CODECO armed group, which has been blamed for a string of ethnic massacres in the area.

“CODECO militiamen entered Drakpa and started to cut people with machetes. They did not fire shots in order to operate calmly,” Banju told AFP on Sunday. “The victims are displaced people who had fled Ngotshi village to set up in Drakpa,” he said, adding that five others were wounded.

Gold-rich Ituri province has been plunged back into a cycle of violence since late 2017 with the rise of CODECO, which has since split into rival factions. The group is a political-religious sect that claims to represent the interests of the Lendu ethnic group.

Ituri and neighbouring North Kivu have been under a state of siege since May 6, an exceptional measure to combat armed groups including CODECO and the Allied Democratic Forces (ADF). The ISIL (ISIS) armed group bills the ADF as its local affiliate.

Despite the crackdown, and support from the Ugandan military since late November, attacks have continued and more than 1,000 civilians have been killed from May 2021 to January this year, figures from the Danish Refugee Council show.

In the region of Beni, which neighbours Ituri, “four young people were killed in an ambush by ADF rebels on Sunday, three kilometres (1.8 miles) from Eringeti,” said Sabiti Njiamoja, an official from the office of the governor of North Kivu province.

Violence on women and children: ‘It is very clear that our...