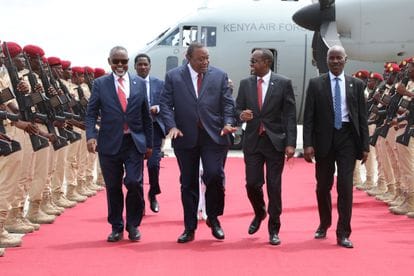 East Africa leaders have scheduled a meeting for Monday, June 21, so as to discuss DR Congo conflict following heavy fighting between Kinshasa and Kigali

According to Kenyan presidency, the leaders of seven nations comprising the East African Community bloc will meet on Monday to discuss the security situation in the Democratic Republic of Congo’s violence-torn east.

The meeting comes as heavy fighting revives decades-old animosities between Kinshasa and Kigali, with the DRC blaming neighbouring Rwanda for the recent resurgence of the M23 rebel group.

Rwanda has repeatedly denied backing the rebels while both countries have accused each other of carrying out cross-border shelling.

People in the eastern DRC “have long suffered and continue to pay an inordinately heavy price in loss of lives, property and elusive peace,” the Kenyan presidency said in a statement announcing Monday’s meeting in Nairobi.

DRC President Felix Tshisekedi has accused Rwanda of seeking “to occupy our land, rich in gold, coltan and cobalt, for their own exploitation and profit” and urged the international community to condemn Kigali.

Kenyatta said the regional force will work alongside local provincial authorities and in close coordination with MONUSCO to disarm anyone bearing illegal firearms.

The mineral-rich DRC is struggling to contain dozens of armed groups in the east of the vast nation, many of which are a legacy of two regional wars a quarter of a century ago.

Relations between Kinshasa and Kigali have been strained since the mass arrival in the DRC of Rwandan Hutus accused of slaughtering Tutsis during the 1994 Rwanda genocide.

Fornication is no respecter of gender, Toke Makinwa Asserts