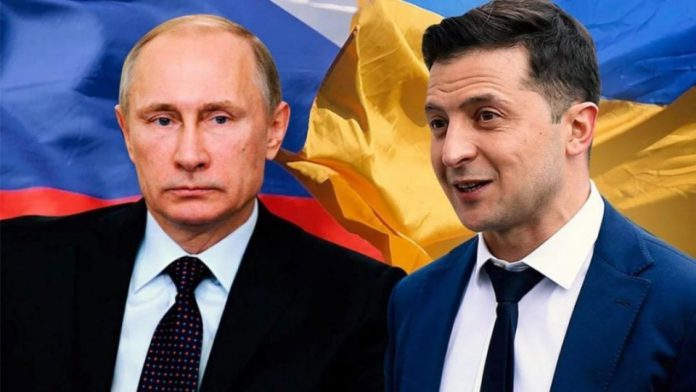 Russia’s leader, Vladimir Putin has agreed to meet with Ukrainian president, Volodymyr Zelensky in person to resolve the ongoing conflict in Ukraine.

The Russian tyrant will allegedly meet Zelensky ‘at some point’, the Express reported, after the Ukrainian leader accused Russia of ‘war crimes’ amid the bombing of an art school and theatre in Mariupol where civilians were sheltering.

The two leaders have let their diplomatic teams conduct peace talks on neutral ground since after the start of the conflict on February 24.

Zelensky had recently declared that Russia will ‘go down in history of responsibility for war crimes’, and admonished the invaders’ bombardment and siege of southern port city Mariupol, which has for weeks been pounded by airstrikes and missiles.

‘To do this to a peaceful city… is a terror that will be remembered for centuries to come,’ the Ukrainian leader said.

According to reports, Kyiv has insisted on the inclusion of one or more Western nuclear powers in the negotiations with the Kremlin and on legally binding security guarantees for Ukraine.

But Chancellor Rishi Sunak today urged a ‘degree of scepticism’ over any potential peace deal in Ukraine, as an official in Zelensky’s office told AP that the main subject discussed between the two sides last week was whether Russian troops would remain in separatist regions in eastern Ukraine after the war and where the borders would lie.

‘Ukraine has always sought a peaceful solution. Moreover, we are interested in peace now,’ the President stated.

We’re not aware – CBN reacts to Gov Obaseki’s claim of...