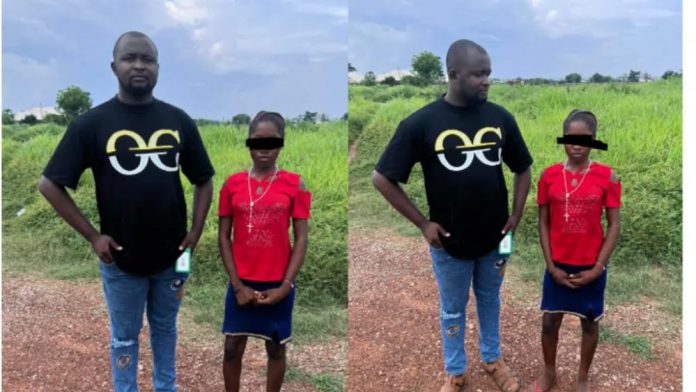 The National Agency for the Prohibition of Trafficking In Persons (NAPTIP) has rescued a 12-year-old girl from a forced union with a 50-year-old farmer in Adaka area of Makurdi.

It was gathered that the girl was taken by to the farmer by her family to be the third wife.

The attention of NAPTIP was called to this issue by an activist, Lucky Iduh and a follow-up by Makurdi-based humanist, Ukan Kurugh, who raised an alarm on Tuesday about the minor.

According to Lucky via a post on Facebook, the young girl was allegedly deceived into marrying the 50-year-old farmer as his third wife by her family a few months back after she was initially told that she is been taken to where she would live and attend school.

“But when she discovered that she was brought to the man’s house as his third wife, the girl started raising alarm and seeking help to escape from the house. That was what attracted the attention of neighbours who started asking for help for the girl,” he stated.

The NAPTIP Commander, Makurdi Zonal Command, Gloria Bai, who confirmed the rescue of the minor, said preliminary investigation revealed that she had been in the forced marriage for about three months and the man had been abusing her assuring that efforts were on to arrest the man who had fled his home.

“Yes we have rescued her. We got this report from a concerned citizen and contrary to the media report that NAPTIP was ‘slow and unenthusiastic,’ we swiftly went into action to search for the address where the girl was and when we got the address, we planned to go first thing in the morning so that we get both the man and the victim and by 6am, we were there.

“Unfortunately, the rain came in. We were able to rescue the girl but the man had gone out. We are on it and our officers are already on surveillance to get the man as soon as he is seen.”

The zonal commander added that the girl will be taken to the hospital to undergo proper medical examination and the farmer will be prosecuted.