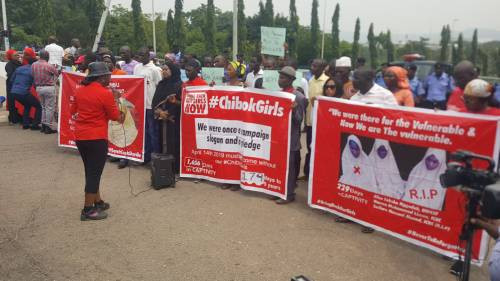 As Wednesday, April 14 marks the 7th year Boko Haram terrorists invaded Government Girls Secondary School in Borno State, the parents have expressed wishes of seeing their children before they die.

Recall that on April 14, 2014, Boko Haram forced 276 girls into a truck and moved towards the Sambisa Forest. Some girls escaped soon after the abduction, and more than 100 others have since been freed through negotiations. However, 112 girls are yet to be released.

One of the parents, Bulama Jonah whose 18-year-old daughter, Amina was among the abducted Chibok girls prayed to live and see the return of his daughter. He told Daily Trust that it is tragic for parents to die without seeing their children.

According to him, 17 parents had died since the incident and many others were sick. He therefore appealed to the President Muhammadu Buhari administration to do more in its efforts to defeat Boko Haram and rescue their children.

He added that families were in confusion in the absence of any communication from the government on the whereabouts of the girls. Reading out from his old pocket notebook in which he recorded important dates and events since the abduction, including their visit to President Muhammadu Buhari, Jonah gave the name of 15 out of the 17 deceased parents.

“If the government had responded in time, our daughters would have been saved. The United States had spotted 80 girls during the last administration, why did the government fail to rescue them. We, therefore, call on the president to step up search for these innocent girls.

“We heard that (former President) Obasanjo, at a point said many of the girls were pregnant and recently, we heard he concluded that the girls were dead and could not be found.

“It is always better for children to bury their parents and not the other way round. Sadly, our predicament is worse because we are not even sure if our daughters are alive. Assuming we saw their dead bodies and bury them, we would have carried on with our lives.

“I always dream that my daughter is back and pray the federal government will rescue them before we die.”

Bring Back Our Girls Convener, Oby Ezekwesili who also marked the 7th year of the abduction lamented that the Nigerian government and citizens missed the opportunity of making every life in the country count.