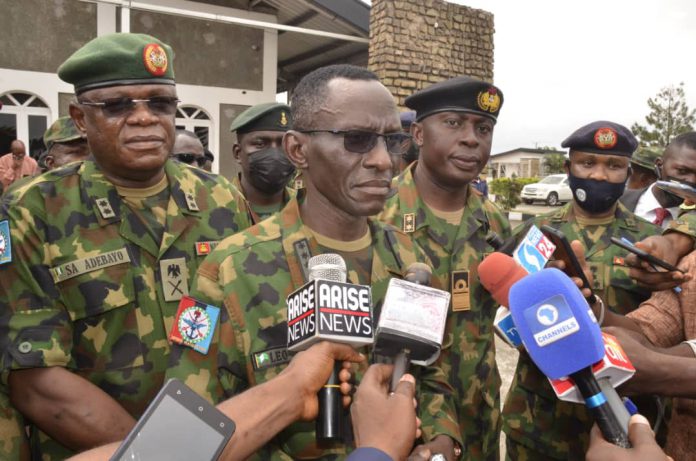 The Chief of Defence Staff (CDS), General Lucky Irabor, has assured the people of the South-East of the military’s commitment towards improving the security situation in the region and the nation at large.

Gen Irabor gave the assurance, yesterday at the Chief of Defence Staff’s interaction with retired senior military officers in the Southeast geopolitical zone held in Owerri, the Imo State Capital.

Addressing participants at the forum, the CDS said the AFN are at the forefront of redressing various security threats in the country.

According to him, the military in synergy with the Nigeria Police and other security agencies, are working round the clock to redress the asymmetric security threats confronting the nation.

A statement signed by Deputy Director Defence Information, Air Commodore, Wap Maigida explained that the current agitations in the zone made the South-East security situation very peculiar, noting that a good number of those who are in support of such agitations have a wrong understanding of the realities on the ground.

He described the engagements of the military veterans in the region as useful, noting that with their privileged and distinct positions, they could bring greater understanding to stakeholders in the region as well as disabuse the misconceptions and perceptions of the agitators.

Gen Irabor while commending the senior citizens for their large turnout, noted that they remain a dependable partner in establishing peace and stability across the country.  According to him, among the various stakeholders, the retired senior military officers have the greatest interest within the matrix of defence and national security.

The CDS urged the veterans to remain loyal as demonstrated during their patriotic service in the military while reminding them that both retired and serving military personnel are completely sold-out to the unity and faith, peace and progress of the country.

The Chief of Defence Civil-Military Cooperation (CDCMIC), Rear Admiral Fredrick Ogu, in his opening remarks, said the input of the retired senior officers is germane in proffering lasting workable solutions to prevailing security in the region.

The CDCMIC, recalled that the first and second edition of the CDS interaction session with retired senior military held in the Southwest and Northwest regions would be replicated in the remaining geopolitical zones and the FCT.

The General Officer Commanding (GOC), 82 Division, Nigerian Army, Major General Taofeek Lagbaja, in his welcome address, said the forum would further shape and enhance AFN collective efforts at responding to the emerging security challenges in the SE. The GOC maintained that the AFN and security agencies have continued to enjoy unparalleled support and goodwill of the people.

The driving forces behind crypto adoption in Africa in 2022

There Are No Agreement Between Messi, Barcelona – Reports

The world is not ready to take 240 Million Nigerians –...