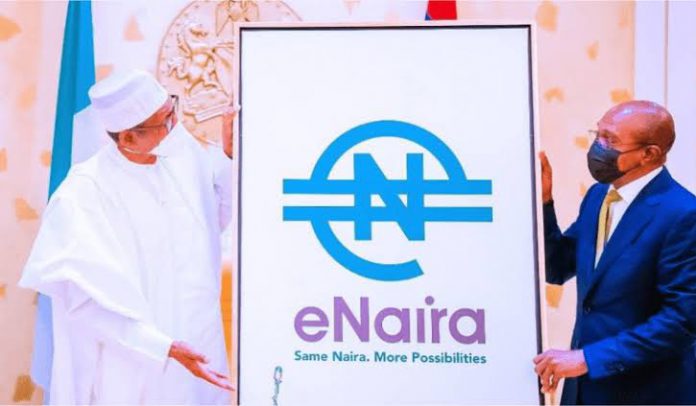 “Indeed, some estimates indicate that the adoption of CBDC and its underlying technology, called blockchain, can increase Nigeria’s GDP by 29 billion dollars over the next 10 years,” the president said.

Mr Buhari posited this on Monday while performing the formal unveiling of Central Bank of Nigeria (CBN) Digital Currency, eNaira at the Presidential Villa, Abuja.

He said a handful of countries including China, Bahamas, and Cambodia have already issued their own CBDCs, making Nigeria the first country in Africa, and one of the first in the world with the introduction of the eNaira.

The president said there were Nigeria-specific benefits of the digital currency, whose creation began in 2017, and “intensified over the past several months with several brainstorming exercises, deployment of technical partners and advisers.”

He revealed that the CBN had collaborated with the Ministry of Communication and Digital Economy, Nigerian Communications Commission, to ensure the robustness, safety and scalability of the CBDC System.

“The eNaira and Naira will have the same value and will always be exchanged at 1 naira to 1 e-Naira,” the CBN governor explained.

Interpol arrested Sunday Igboho and his wife in Benin Republic —...