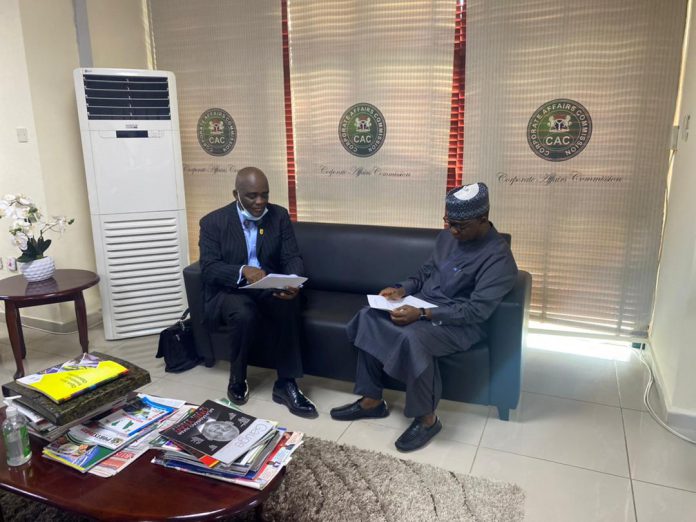 The High Commission of Canada in Nigeria has lauded the electronic services offered by the Corporate Affairs Commission, which it said would go a long way in fast-tracking its process of treating Visa applications from Nigerians.

A statement released by the Head Media of the commission, Rasheed Mahe revealed that The Counsellor (Migration) Delphina Ocquaye stated this in Abuja during a courtesy visit to the Registrar General/CEO of the Corporate Affairs Commission, Alhaji Garba Abubakar.

Delphina Ocquaye of the Deputy High Commission of Canada in Lagos who stated that the visit was to amongst others seek for partnership and discuss the legal process for confirming civil documents, noted with delight that the CAC had digitized its processes as opposed to some organizations that remain paper base.

She revealed that the North American country was attracting huge interest from Nigerians pursuing either business interests, permanent residency or scholarship amongst others and added that in view of their huge potentials, Nigerian citizens were accorded express entry service by the Canadian authorities.

The Counsellor said that owing to the high intellect of her citizens, Nigeria is currently ranked number 2 on the list of countries enjoying permanent residency in Canada.

Responding, the Registrar General of the Corporate Affairs Commission, Alhaji Garba Abubakar noted with delight the request for partnership from the Canadian High Commission and pledged to grant electronic access to enable them to verify amongst others the legal status of visa applicants.

Alhaji Garba Abubakar used the forum to highlight some of the reform initiatives of the Commission aimed at making it operate in line with global best practices.

Meanwhile, the Corporate Affairs Commission (CAC) has been applauded for promoting discipline and instilling sanity in the conduct of businesses in Nigeria.

The Lagos Business School (LBS) gave the Commendation in Abuja during a courtesy call on the Registrar General of the CAC, Alhaji Garba Abubakar in his office.

Victor Banjo, Director, Executive Education of the LBS expressed satisfaction with the reform initiatives being implemented by the CAC and urged it to sustain the tempo.

He maintained that effective directors and leaders in the public sector were crucial to ensuring a greater and sustainable economy which the LBS was helping to build.

In his remark, the Registrar General of the CAC, Alhaji Garba Abubakar thanked the LBS for the visit and their support to CAC’s reform initiatives.

He, therefore, pledged to study their proposal for partnership with a view to according priority attention to it where necessary.