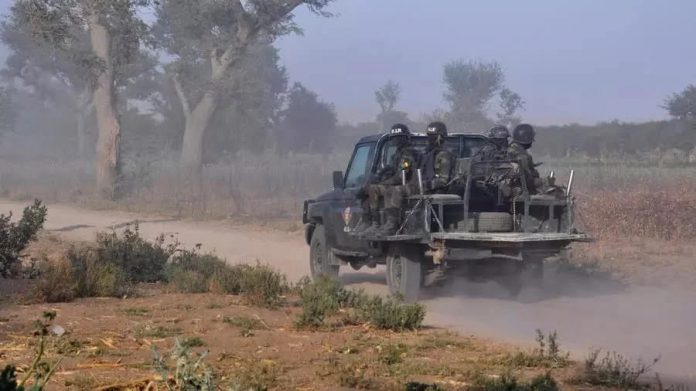 On Monday, September 21, four Cameroonian soldiers were given 10-year prison term for the killing of two women and two children in an incident which incited international protest.

Three other soldiers were arrested together with the aforementioned men after a video was was released in July 2018 showing uniformed men levelling rifles and firing at the victims, one of whom had a baby strapped to her back.

The video which one of the few that was released in recent years of alleged atrocities by Cameroonian forces during operations against Islamist Boko Haram militants in the north and Anglophone separatists in the west.

The trial which started in January has been conducted behind closed doors.
According to Sylvestre Mbeng, the lawyer of commander Etienne Fabassou, he was found guilty of complicity in murder, while the court found the three of the soldiers guilty of murder.
The four men were charged with a 10-year prison term each.

Mbeng said, “Another soldier received a two-year sentence for violating orders, while two others were found not guilty on all counts and released.

“Under Cameroonian law, some of the defendants could have faced the death penalty, although Cameroon has not executed anyone since 1997.”

“Fabassou would likely appeal the verdict as witnesses gave contradictory accounts of whether he gave the order to shoot,” Mbeng added.

The video was initially dismissed as ‘fake news’ by government and army officials.

Activists, including Amnesty International, who accused the government soldiers of repeatedly engaging in torture and extra-judicial killings in the far north, welcomed the eventual arrest and persecution of the soldiers.