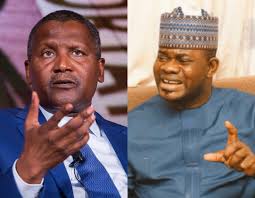 The Federal Government has waded into the face-off between the Kogi State Government and Dangote Cement at Obajana in Kogi State as it has ordered the reopening of the factory that was shut down on the orders of the State governor, Alhaji Yahaya Bello.

In what seemed like a counter order President Buhari directed that the factory be reopened without further delay.

The decision was coming after the meeting of the National Security Council which was held in Abuja.

The meeting which was presided over by President Muhammadu Buhari asked the Kogi State government to resolve the issue through the Courts.

The ownership status of the Dangote Cement which was originally known as Obajana Cement at its establishment in 1992, was called to question as Dangote Industries claimed ownership.

However, despite the good reason in Bello’s quest to determine the true position of the ownership of the factory, crude methods were adopted to effect the orders of the Kogi State Government as there were claims by the Dangote group over the shooting of seven of its staff by agents of the government.

In a statement by the Company’s management, it claimed that the Kogi State government was never committed to its part of the obligation, hence, Dangote now wholly owned the plant based on an investment he made.

Pandora Papers: I have not broken any law, says Rep member,...