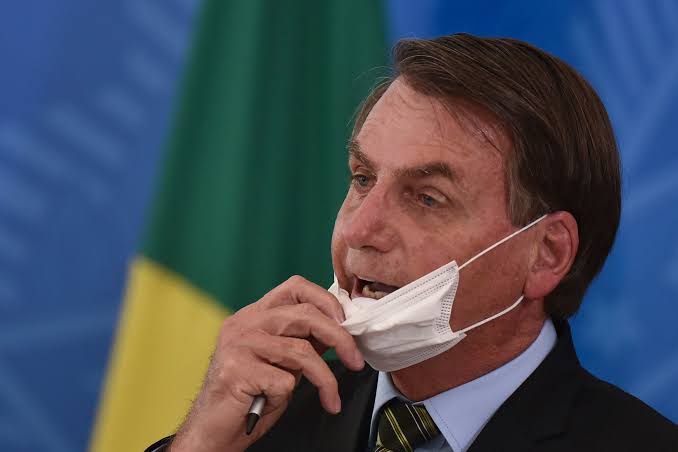 Brazil President, Jair Bolsonaro has been reminded that he is not above the law at the same time risks fines if he continues to break rules as a Federal judge on Monday ordered to rectify his “at best disrespectful” behaviour by wearing a face mask when circulating in the capital, Brasília.

Before now, the president has sparked outrage by repeatedly flouting measures designed to slow the advance of a coronavirus pandemic that has killed more than 50,000 Brazilians.

The rightwing populist has made a succession of public appearances – at protests, shops and even a floating barbecue – wearing a mask incorrectly, or not at all.

In line with media reports, the judge ruled Bolsonaro was not above the laws of the federal district, which contains Brazil’s capital, and would face a daily fine of 2,000 reais (£310) if he continued to break the rules. The use of masks has been compulsory there since late April.

“The president of the republic must take all necessary measures to avoid the transmission of Covid-19 – be that in order to protect his own health or that of those around him,” Renato Coelho Borelli ruled, according to a transcript published by the Estado de São Paulo newspaper.

“Even though there is no consensus within the medical/scientific community about the dissemination of Covid-19 by asymptomatic carriers, it is at best disrespectful to go out in public without using PPE – putting other people’s health at risk,” the judge added.

“A straightforward Google search is enough to find numerous images of the defendant Jair Messias Bolsonaro moving around Brasília and the surrounding federal district without using a mask and exposing others to the spread of this infirmity that has caused a nationwide upheaval.”

The judge cited Brazil’s oath of office in which presidents vow to “uphold, defend and fulfil the constitution, obey the laws [and] promote the wellbeing of the Brazilian people”.

“That’s to say, the president is constitutionally obliged to follow the country’s existing laws, as well as promote the wellbeing of the population, which means taking the necessary measures to … prevent the propagation of a virus that is spreading rapidly and often silently.”

“No one, not even the head of the executive, is above the constitution and laws of the republic,” the judge concluded.

Thus far, Bolsonaro made no immediate comment on the ruling.

Photo Source: The Times of Israel