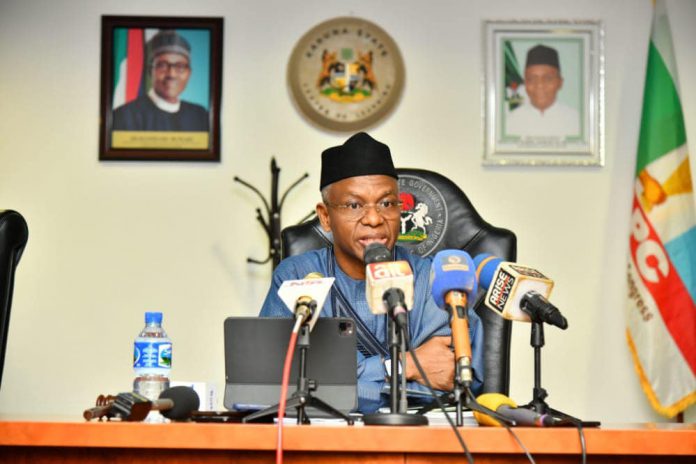 El-Rufai made this known after the presentation of the first quarter security report covering January 1st to March 31st 2022, which took place at the Council Chambers of Sir Kashim Ibrahim House on Thursday, May 19.

According to the governor, the use of Improvised Explosive Devices (IEDs) in the state suggests that terrorists have moved into the state.

“So, this is not only a very dangerous situation we found ourselves in. But the entire Northwest is facing a very serious threat. That’s the reason I have been drumming for theatre command in the zone and also the need to take some punitive actions against the terrorists,” he said.

“And we would like the military and security agencies to take notice of this before it goes out of control,” he warned.

The governor also drew attention to the use of IEDs and mines in the state recently, adding that “we have been lucky and thanks to the police, we have been able to defuse many of the IEDs without loss of lives.”

“It shows a movement from banditry to terrorism with expertise in making explosive devices. And again this is because Boko Haram and Ansaru elements have moved into the state.” he added.

El-Rufai also called on the security council to look into the possibility of clearing the three dangerous towns of Katari, Rijana and Akilibu all of situated have become safe havens for the terrorists.

“Why is it that most attacks or kidnappings occur in these towns. I think something is wrong somewhere.”

Earlier, the state commissioner of Internal Security and Home Affairs, Samuel Aruwan had said that 360 people were killed, while 1,389 persons were kidnapped within the period under review across the state

‘We are struggling to even sleep’: Eight-year-old boy ‘shoots’ friend in...