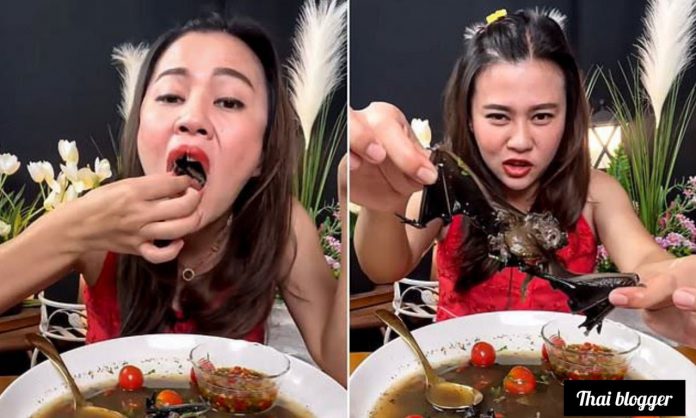 A YouTuber, Phonchanok Srisunaklua, is facing five years in jail after recording a video of herself eating a whole bat in a bowl of soup.

The Thai blogger had uploaded the one minute 40-second clip to her Gin Zap Bep Nua Nua (Eat spicy and delicious) YouTube channel, where the dead animals are seen floating in soup with cherry tomatoes

Describing the bats as being ‘delicious’ and comparing them to ‘eating raw meat,’ she is then seen ripping the animals apart and dipping them in a spicy sauce called Nim Jam

At one point the footage shows the food content creator holding up a whole bat to the camera and declaring ‘it has teeth’ before beginning to crunch on the bones and saying ‘the bones are soft’.

Meanwhile, the video has outraged many viewers as they raised fears over health implications.

However, Veterinarian Pattaraphon Manee-on, head of the wildlife health management group at the Department of National Parks, Wildlife and Plant Conservation, said: ‘I was shocked to see it in the clip now.

‘Because the incident should not happen both in Thailand and around the world, it is very risky behavior, especially as bats have a lot of pathogens.’There is no proof that the hot water temperature will actually kill the germs

Just touching the saliva, blood, and the skin is considered a risk.’

We are not contemplating a fresh lockdown- PTF