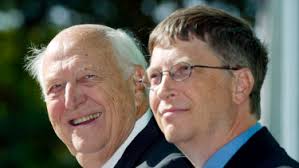 The father of the Microsoft co-founder, William H.Gates Sr. died at 94 years old after suffering from Alzheimer’s disease.

He died on Monday, September 14 at his beach home in Hood Canal, Washington.

He has seen his middle child achieve a lot and has helped him on his journey where necessary.

Gates Snr. once said in a speech he gave in 2003 to fellow members of Rotary that, “I never imagined that the frequently argumentative little boy I faced each night at dinner, the one eating my food and using my name, was to be my future employer.”

He started the William H. Gates Foundation on 1994 with a shocking amount, $94 million which he gave out to the global health and community groups in the Pacific Northwest.
The philanthropist always scanned pleas ranging from serious to fickle.

The foundation which is now known as Bill & Melinda Gates Foundation, has expended 50 billion to improve childhood immunization, put a stop to polio, provide African farmers with seeds and improve public schools in America.
Williams Gates served as one of the foundation’s co-chairs together with his son.

In an interview years ago with Seattle Times, he said, “We have to be helpful to each other or it would be an impossible world. This is not only good religion but very practical for economy and humanity.”

William Gates built his law practice to an enviable position. Microsoft, which Bill co-founded together with Allen in 1975 is one of his clients.

He also served as a trustee for more than two dozen Pacific Northwest groups.

His late wife, Mary Gates died of cancer in 1994 and he was married to his second wife Mimi Gates who was the former director of the Seattle Art Museum, in 1996.